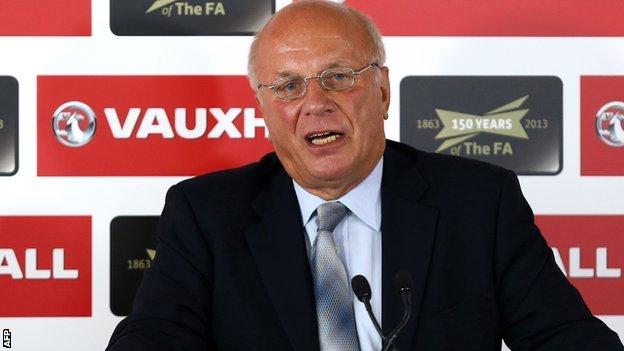 Premier League clubs say they are fully behind plans to increase the number of Englishmen capable of playing in the top flight and at international level.

The aim of the commission is to improve the England team's long-term fortunes.

The commission will ask three key questions on how England can improve their long-term prospects:

"There is no doubt around [clubs] as to the benefits of a national set-up that is thriving and performing well," said Premier League chairman Anthony Fry.

"It is evident from discussions with the clubs that there is a strong desire to see greater numbers of England-qualified players coming through their academy systems who are capable of performing at both Premier League and international standard."

In his first speech as FA chairman, Dyke invited the chairmen of the Premier League, Football League, Professional Footballers' Association and League Managers' Association to join the commission, which is expected to start work later this month.

He says the number of foreign players in the Premier League has denied first-team opportunities to home-grown prospects and, in turn, had an adverse effect on the national side.

"I am pleased that the Premier League clubs, board and executive all want to contribute to the commission I am setting up," said Dyke.

"There is a great deal of knowledge there and I am sure we will be able to find some very concrete ways of improving the pool of talent available to England managers."

Dyke, who was named as David Bernstein's successor at the FA in March, has also set the national team a twin target of reaching the Euro 2020 semi-finals and winning the World Cup in 2022.