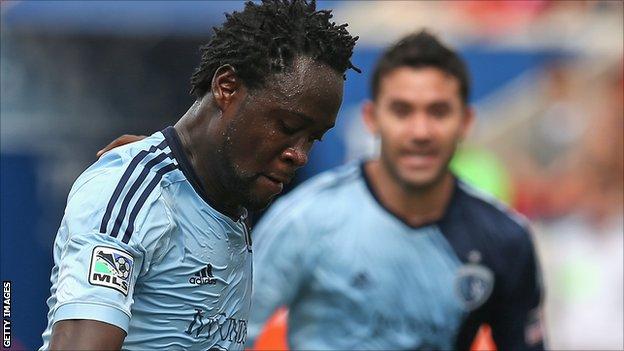 Middlesbrough manager Tony Mowbray has said striker Kei Kamara has the opportunity to prove his fitness for Saturday's trip to Ipswich Town.

Kamara, 29, has been on international duty with his native Sierra Leone, but received a work permit to allow him to complete his move to the Riverside.

"He'll be in and around, the frustration is he's done no work with the team," Mowbray told BBC Tees.

"Kei will meet us in Ipswich and we'll have a chat with him and see how he's feeling, whether the travelling has taken its toll."

He made 11 appearances for the Canaries, scoring once in the Premier League.

While Kamara came through the international break unscathed, putting him in line to make his debut against the Tractor Boys, Hungary international Josef Varga was injured in a 3-0 defeat by Romania and missed the 5-1 win against Estonia.

"Josef has done well for us and has adapted pretty quickly to this league which is unique in intensity," Mowbray added.

"He's had to feel his way in, which has been difficult because people expect you to hit the ground running from day one.

"We'll give him every chance, he's played his part this season and done very well."

If Varga is unavailable, Mowbray could turn to another of his August signings in Jacob Butterfield to fill the gap.

"Jacob knows the league and has played in the league with Barnsley," Mowbray said.

"In training he looks a very technically proficient footballer. If Jacob does get an opportunity we'll hope he hits the ground running."