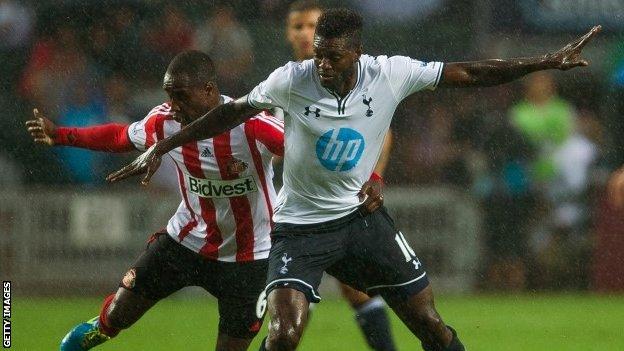 Andre Villas-Boas says he would have allowed Tottenham striker Emmanuel Adebayor to leave the club this summer.

The 29-year-old Togo striker has not featured for Spurs this season, with £26m summer signing Roberto Soldado used as the lone man in attack for the club's league games.

"There were opportunities for him to leave," said Spurs boss Villas-Boas.

"But he was not interested in them. We presented the player and his agents the situations we were presented with."

QPR boss Harry Redknapp said on Friday he was interested in signing Adebayor on loan.

"He can't go on loan in the Premier League, he can only go into the Championship but, whether he'd want to do that, it would be difficult I think," he said.

Villas-Boas said Adebayor had been ordered to train with the club's reserves, although he recently returned to Togo following the death of his brother.

"At the moment Ade is not with us, because we have granted him authorisation to stay up until Monday in his country for personal reasons, so he's not going to be involved against Norwich [on Saturday]," Villas-Boas added.

"Up to when I find it appropriate, he will train with the development team.

"He was a couple of weeks late in relation to the rest of the team, bearing in mind his personal tragedy. So at the moment, things stand as they are."

Adebayor signed for Spurs from Manchester City in a £5m deal in August 2012 following a successful season on loan at White Hart Lane during which he scored 17 Premier League goals.