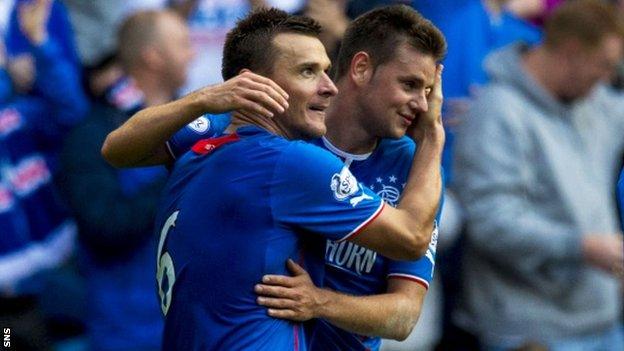 Lee McCulloch scored his second successive hat-trick, but League One leaders Rangers had to come from behind before beating a spirited Arbroath.

The Red Litchties Arbroath took the lead through Alan Cook before conceding five goals in the last 30 minutes.

Bilel Mohsni equalised on his debut as Rangers featured six of their summer signings after the end of a year-long signing embargo.

Andy Little was the other scorer for the Glasgow side.

And the Ibrox side are now five points clear at the top of the table after Dunfermline Athletic and Stenhousemuir both dropped points.

Rangers manager Ally McCoist had talked up the risk of changing a side that had won its first four league games and Arbroath counterpart Paul Sheerin questioned if the Ibrox summer signings could all quickly gel as a team.

For the best part of an hour, the visitors' boss looked to have called it correctly as Rangers' new-look side struggled to knot together and make an impact.

Arbroath, who held Celtic to a draw in last season's Scottish Cup on their last visit to Glasgow, had hopes of at least restricting a very experienced-looking Rangers.

From the start, the visitors were compact and organised with on-loan Motherwell striker Lee Erwin hoping to unsettle the first-time pairing of McCulloch and Mohsni at the heart of the home defence.

McCulloch forced a save from Arbroath goalkeeper Scott Morrison, but the home side's main threat was from set-pieces.

Darren Smith fired a dipping shot just over Rangers goalkeeper Cameron Bell's bar and they improved on that within two minutes of the interval as Cook's measured chip carried the ball over Bell and under his crossbar.

However, Rangers were level with a free-kick from Steven Smith was deflected to Mohsni, who calmly side-footed past the goalkeeper.

Rangers grabbed the lead when Law's corner was met by the inrushing head of McCulloch.

The Rangers captain then drilled a superb shot high into the top corner from 30 yards before Little added the fourth with an angled drive.

McCulloch completed the scoring in stoppage time as he nodding home Peralta's cross at the back post.