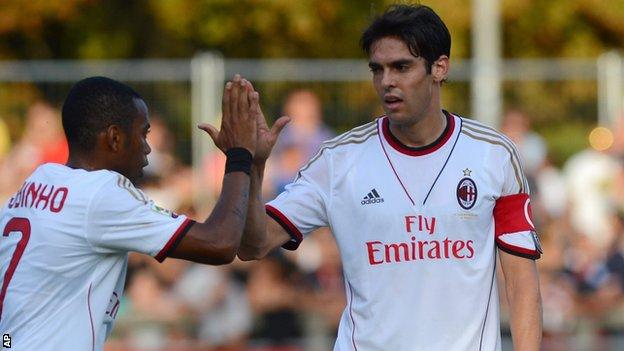 Brazil midfielder Kaka is poised to start for AC Milan this weekend in his first Serie A match since returning to Italy from Real Madrid.

"I think he'll be a starter," said Milan coach Massimiliano Allegri, whose sixth-placed side face Torino.

"He's in good physical shape. He's a bit excited for his debut."

Kaka, who won the Champions League and a league title during a six-year spell with Milan, admits he feels "like a kid" ahead of his return.

And he insists he will be able to fit in to the current team alongside young Italy attacking duo Mario Balotelli and Stephan El Shaarawy.

"It's been a good week and we're working well," he said. "I've met both Balotelli and El Shaarawy and they seem good guys. We can all play together. There's a lot of respect among the players here."

Milan have one win and one defeat from their opening two league matches, with Roma leading the early-season table after two victories.

The Giallorossi travel to winless Parma on Monday, but the biggest match of the weekend sees Inter Milan host defending champions Juventus on Saturday.

Both teams also boast 100% winning starts, along with Napoli and Fiorentina, who face home games against Atlanta and Cagliari respectively.

Real Madrid are aiming to extend their winning start to La Liga season to a fourth game when they visit Villarreal in a top-of the-table clash.

And they will have world-record signing Gareth Bale among their ranks after coach Carlo Ancelotti confirmed the Welshman will make his debut on Saturday.

Villarreal, in their first season back among the Spanish top flight, have also won their opening three games and sit in third place, putting them above Real on goal difference.

Leaders Barcelona welcome Sevilla, who have yet to record a victory in their opening three games, to the Nou Camp on Saturday.

Barca boss Gerardo Martino has recalled skipper Xavi and Alexis Sanchez after the pair were rested for the exciting 3-2 win at Valencia.

However, forward Pedro has not been named in the 20-man squad as Martino continues to rotate his squad.

Bayern Munich winger Arjen Robben has backed his side to return to winning ways in Saturday's home match against Hannover.

The German treble winners surprisingly dropped their first points of the new Bundesliga season in a 1-1 draw at Freiburg.

Pep Guardiola's men are second after four games and trail arch-rivals Borussia Dortmund, who have won all of their opening matches, by two points.

"It's a shame we dropped two points at Freiburg," said Netherlands international Robben.

"We have to make sure we don't leave ourselves open to the counter [against Hannover].

"It's down to us, it's not about Dortmund. Of course we always want to be number one, but to do so we have to win our games."

Robben has shrugged off an ankle injury, while Guardiola is also hoping that Germany midfielder Bastian Schweinsteiger will be fit after a similar injury.

"It has got better, but it's still not good, it'll be close," said Dortmund coach Jurgen Klopp.

Striker Robert Lewandowski is expected to be fit after suffering a knee strain, while midfielder Marco Reus has trained after missing Germany's World Cup qualifier against Faroe Islands on Tuesday with an upset stomach.

Paris St-Germain coach Laurent Blanc makes his first return to the club where he started his coaching career when the French champions face Bordeaux on Friday.

Blanc enjoyed a successful three-year spell at Bordeaux between 2007 and 2010, winning the Ligue 1 title and the French Cup in 2009 and reaching the 2010 Champions League quarter-finals, before leaving to become France coach.

Since replacing Real Madrid-bound Carlo Ancelotti in the summer, Blanc has led PSG to two wins and two draws in their opening four games.

But the fourth-placed side will be without injured pair Jeremy Menez and Javier Pastore against Les Girondins.

France forward Menez has yet to make an appearance this season after back surgery, while Argentina midfielder Pastore is suffering from a foot injury.