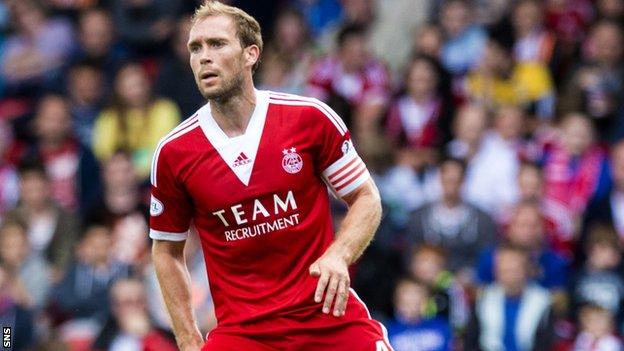 Aberdeen captain Russell Anderson faces a spell on the sidelines after breaking his hand in a training-ground accident.

The 34-year-old defender needs to wear a protective cast and will miss "the next few weeks", according to manager Derek McInnes.

"It's a bizarre injury," said McInnes. "He caught his hand in the back of Declan McManus's shirt.

"We thought he had dislocated his pinkie, but there has also been a small fracture. It's been painful for him."

Niall McGinn has got severe bruiding. Thankfully, there is no ligament damage, no long-term damage

"Niall has got severe bruising," explained McInnes. "He is very tender in that area.

"Thankfully, there is no ligament damage, no long-term damage.

"It's just a case of letting it settle down.

"We don't anticipate him being out for any length of time, but certainly it is painful enough to rule him out for Saturday."

Better news for the Dons manager is the return of Jonny Hayes, who missed the 0-0 draw at home to St Johnstone with concussion, and defender Andy Considine, who is ready to resume playing after breaking his leg in December.