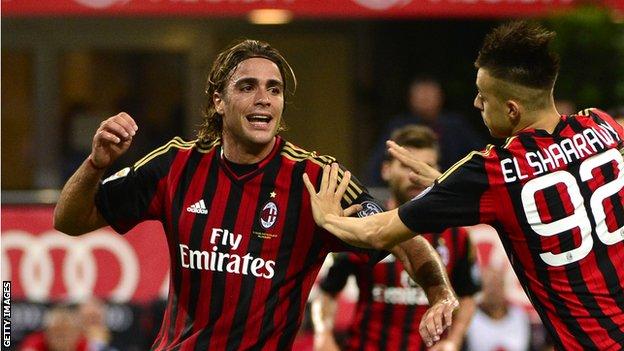 When Celtic sealed their place in this season's Champions League group phase, manager Neil Lennon hailed it as

Both men were smiling but the Rossoneri head coach's joke was rooted in frustration.

Allegri and Lennon, following a caretaker spell, were both appointed in June 2010 and the Italian was first to make his mark, ending a six-year wait for the Scudetto in his debut season.

However, with just one Supercoppa success in the past two campaigns, Allegri's position has been the subject of increasing media scrutiny.

In contrast, Lennon enjoys near untouchable status, with Celtic dominating domestically and preparing for a second successive season in the rarefied atmosphere of Europe's premier contest.

Celtic are the underdogs in a heavyweight group that includes Barcelona and Ajax.

But there is a glimmer of light for the Scottish champions, with Ajax weakened by high-profile departures and Milan in transition.

The old guard has moved on, with Pirlo's continued brilliance at Juventus a source of regret at the San Siro.

A new fiscal reality for Milan made it difficult to hold on to their star men, as Paris St-Germain lured away Zlatan Ibrahimovic and Thiago Silva in 2012.

The loss of such gifted players and powerful personalities has taken its toll, with Allegri's men finishing a distant third last season as Pirlo inspired Juve to the title.

Midfield powerhouse Kevin-Prince Boateng, who scored twice in that clinched a Champions League place, has since been sold to Schalke.

Lennon, however, is unlikely to feel too sorry for the opposition.

The club's biggest summer outlay has been for Alessandro Matri, who scored in both legs as in last season's Champions League round of 16.

And, just for good measure,

The former World Player of the Year won the Champions League and a Scudetto during his previous six-year stint in Milan.

The 31-year-old netted an extra-time winner that knocked Celtic out at the last-16 stage of the competition in 2007.

Just a few months later, he converted a penalty in Glasgow as the teams met again in the group stages - but Milan were beaten 2-1 thanks to Scott McDonald's injury-time strike.

Celtic lost the return fixture in Italy 1-0, but both sides progressed to the knockout stages.

Kaka also featured in both matches when the clubs met in the 2004-05 tournament, Celtic finishing bottom of their group following a 3-1 defeat in Milan and a goalless draw at home.

The Brazilian, who hardly kicked a ball in his last season at the Santiago Bernabeu, is on course for a seventh encounter with Celtic after managing 70 minutes of Saturday's 2-2 draw at Torino, with Milan staging a late comeback to earn a point.

Kaka was given a free role behind compatriot Robinho and former Manchester City striker Balotelli, who maintained his record of never having missed a penalty with the equaliser deep into injury time.

But the new arrival from Madrid struggled to impose himself and it may take a while for him to develop his fitness and an understanding with his team-mates.

With several of his defenders sidelined through injury, Allegri used Dutch midfielder Urby Emanuelson at full-back and Torino caused the visitors problems with their swift counter-attacking, exposing Mexes' lack of pace.

Torino were 2-0 up with 87 minutes gone - and could have been further ahead but for a series of great covering tackles from Nigel de Jong, who sits deepest in the midfield diamond favoured by Allegri.

Following the fortunate draw, the 46-year-old said: "The team needs to be tweaked, we have to find the balance that we lost as we have changed the way we play."

And adding to the beleaguered coach's troubles was an injury to Riccardo Montolivo that will rule the midfield schemer out of Wednesday's game.

Allegri has spoken of retiring at 55 and also of his desire to manage Italy before then.

With just four points garnered from the opening three matches in Serie A and the volatile Berlusconi calling the shots, a change of scenery could come earlier if Celtic cause an upset at the San Siro.