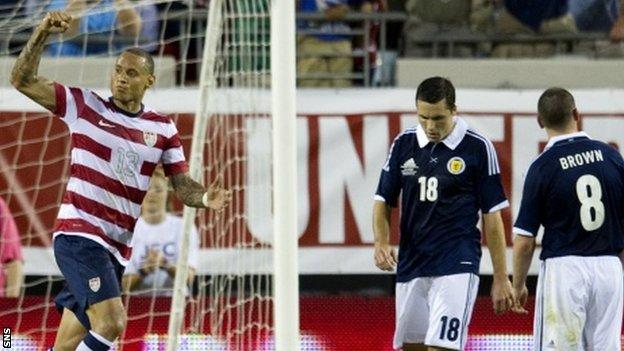 Jurgen Klinsmann's United States will visit Hampden Park on Friday 15 November looking to complete a double in friendlies against Scotland.

The match will give Gordon Strachan's side the chance to avenge a suffered in Florida last year under predecessor Craig Levein.

It will be Scotland's last fixture at Hampden before its redevelopment ahead of the 2014 Commonwealth Games.

The national stadium is a major venue for the Glasgow event.

Opposition for a second friendly, scheduled away from home on Tuesday 19 November, has yet to be announced by the Scottish FA.

While the USA will be using the Glasgow fixture to prepare for next summer's World Cup finals in Brazil, the Scots will be looking to continue their recent improvement in form ahead of the European Championship qualifying campaign.

Scotland had effectively missed out on qualification for Brazil by the time Strachan replaced Levein last year and sit fourth in qualifying Group A despite this week's win in Macedonia.

Strachan said: "While it would be great to be preparing for the World Cup in Brazil, or taking part in the play-offs, this match will give us another opportunity to maintain the momentum achieved with the results and performances against Croatia and Macedonia.

"I have been in recent months and by the unwavering support of our excellent fans.

"I am sure both the players and the Scotland supporters will look forward to the opportunity to finish the year positively."

Head coach Klinsmann said: "The game against Scotland is crucial for us because we have so few games between now and when we name the roster for the World Cup.

"It's a huge opportunity for the players and we are excited to play against a team and in a venue that has so much tradition and history in football."

In the six meetings between the nations, Scotland have won twice, the USA twice, with two draws.