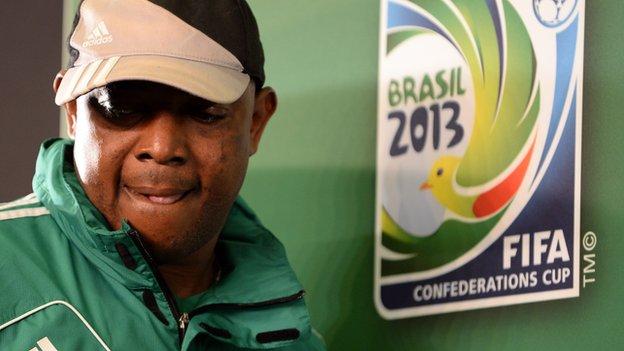 The Nigeria Football Federation (NFF) has received an official query from Fifa over comments made by Super Eagles coach Stephen Keshi, BBC Sport has learnt.

The Malawi Football Association (FAM) had reported Keshi to Fifa after he called their former coach Tom Saintfiet "a white dude who should go back to Belgium".

Keshi has until Thursday to respond to Fifa.

The case concerns comments Keshi made in reaction to Malawi's calls to have a crucial 2014 World Cup qualifier between the two nations in August moved from the city of Calabar on security grounds.

FAM wants action taken over what it calls "racist" remarks by Keshi aimed at Saintfiet.

NFF board member Chris Green told BBC Sport: "We can confirm that we actually received an official query from Fifa before the game against Malawi in Calabar.

"It was addressed to Keshi to respond, but we felt it would create an unnecessary distraction to inform him before a crucial game.

"We are all putting our thoughts together and will give Keshi an opportunity to defend himself within the deadline given by Fifa.

"The federation is confident that coach Stephen Keshi is not a racist and what transpired between both coaches has been blown out of proportion.

"We are very optimistic that everything will be sorted out amicably."

Keshi and Saintfiet met at the departure hall of the Calabar airport on Sunday and there appeared to be no sign of animosity.

In the game, Nigeria dominated on a rain-soaked pitch in Calabar and emerged 2-0 winners over Malawi.

The African Champions now await Monday's draw for the final play-off round, which features the 10 group winners.