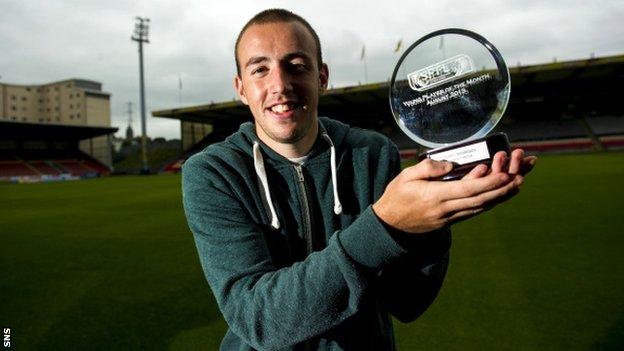 Partick Thistle midfielder Stuart Bannigan hopes to add a first home league win of the season to his SPFL young player of the month award.

The 20-year-old's performances during August helped Thistle to fourth place in the Premiership and to him being the new award's first recipient.

"Getting the home wins are really important," he said ahead of .

"It's been great for me and it's been a good start for the team as well."

It's still very early in the season, but we have had a couple of very good results and we have played good football, which is the most important thing

Bannigan has been an ever-present as Thistle ended their first month back in the top-flight with two wins, two draws and only one defeat in the league, as well as making their way through two rounds of the League Cup.

"Last year, we had a great home record and won 80 or 90 per cent of the games at home," he said. "That helped us on to winning the title.

"Our main aim is just to stay up, but we will try to win as many games as we can and keeping looking upwards.

"A lot of people assumed we would go straight back down.

"It's still very early in the season, but we have had a couple of very good results and we have played good football, which is the most important thing."

Bannigan withdrew from the Scotland Under-21 squad for their European Championship qualifier against the Netherlands through injury but has declared himself ready to face the Dons.

"I've been here for five or six years now," he said.

"I was a YTS coming through here and I didn't think I would get a chance to play for Partick Thistle in the top league.

"It's been fantastic. It's been a very good start.

"Coming up to the top league is a jump up from the First Division and you have to try to test yourself."