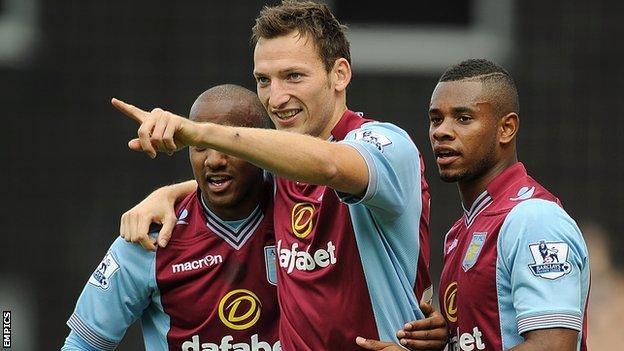 An Andreas Weimann shot for Villa hit the post and Norwich's Robert Snodgrass had a penalty saved by Brad Guzan after Ciaran Clark handled.

Kozak had an initial shot saved but atoned for the miss by side-footing in Gabriel Agbonlahor's cut-back.

Gary Hooper came off the bench for his Norwich debut late on and had an effort tipped over by Guzan.

The Canaries have only lost two of their last 12 league games at Carrow Road - both to Villa.

For Lambert, it is a third win at the club he departed in acrimonious circumstances in the summer of 2012 and ends Villa's run of three top-flight defeats.

Villa almost got off to the ideal start when Agbonlahor pulled the ball back for fellow forward Weimann, whose low curling shot came back off the post. Christian Benteke's effort from the rebound was saved by John Ruddy but the striker was offside.

The chance set the tone for an action-packed first-half, with the Canaries then spurning two glorious chances to take the lead.

Firstly, the home side were awarded a penalty for Clark's handball only for midfielder Snodgrass to send his spot-kick too close to Guzan.

Snodgrass delivered the cross which led to Norwich's next opening as he found winger Nathan Redmond, who side-footed a ball across goal, where striker Ricky van Wolfswinkel chested the ball over from point-blank range.

"Three times Aston Villa boss Paul Lambert has been back at Norwich and three times he has got the better of their manager Chris Hughton. There was just the one goal in it, with Libor Kozak scoring within 90 seconds of coming on."

The chances continued to flow as Benteke shimmied and had a shot deflected wide, while Van Wolfswinkel's first-time shot from a right-wing cross flew a whisker wide.

Benteke was forced off injured for Villa but any relief the Canaries might have had at the dangerous Belgium international's exit was short-lived as his replacement Kozak scored almost immediately after coming on.

The Czech Republic striker had his first effort excellently saved by Ruddy but, after Agbonlahor latched on to the loose ball and teed him up again, the summer signing from Lazio side-footed in from eight yards for his first Villa goal.

The onus was on Norwich to take the game to Villa but their slow start after the break resulted in manager Chris Hughton bringing on striker Hooper to make his Canaries bow following his move from Celtic in the summer.

Hooper's introduction helped the home side exert some pressure but they struggled to break down Villa's defence.

The closest Norwich came to an equaliser was when a Van Wolfswinkel shot was deflected wide, before Hooper's attempt to divert a cross goalwards ended with Guzan acrobatically tipping the ball over the bar to complete Villa's first clean sheet in 27 league games.

"On occasions when we haven't deserved to get anything we have been quick to put our hands up.

"I don't think that was the case against Aston Villa. On the balance of play we created good chances and we added an offensive endeavour to our play. The result does not reflect our performance.

"What we didn't have at the end of it was a bit of quality, fortune and guile to get us the goal we deserved."

"The last three times we've come down here we've won three times. It's a great record. On the counter-attack we know we're a threat and we could have been two up after a couple of minutes.

"The start we've had has been extremely tough. We've played three of the top sides and ran them all close, even beating one of them. The new lads will take time to settle but so far they've been excellent."

He added: "The medical staff reckon it (Benteke's injury) is his hip flexor. Hopefully, it's not too bad. But Libor Kozak came on and scored within 90 seconds which shows he'll endear himself to our fans."