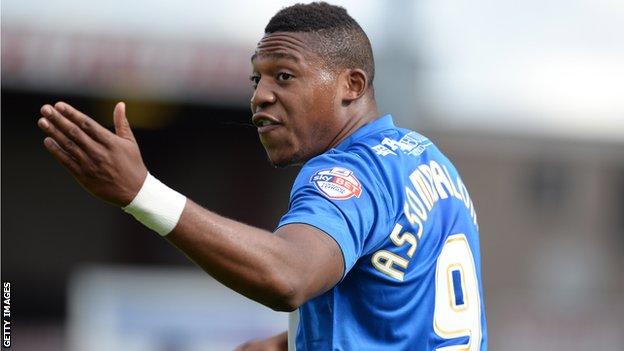 Posh's Nathaniel Knight-Percival was sent off early for an elbow on Patrick Bamford, but Lee Tomlin put them ahead from the penalty spot after Dean Lewington felled Danny Swanson.

The hosts were soon 2-0 up when Britt Assombalonga struck from a tight angle.

Dons sub Izale McLeod pulled one back, but Posh held on despite Mark Little's red for fouling Lewington.

It was a phenomenal defensive display by the hosts, which featured a string of fine saves by keeper Bobby Olejnik, and ensured they remained second in the table.

Meanwhile MK Dons, whose only other defeat this season was away at Sunderland in the Capital One Cup, find themselves in eighth place.

"Today we had chances and didn't take them, so we've just got to get more ruthless in that final third.

"They're a good team, definitely as good as it gets at this level. But when Luke Chadwick has a sitter and then from that break they score their second goal, you can't legislate for that.

"I don't think we could have done any more, maybe lady luck wasn't on our side.

"We're sorry we've not won you the derby you wanted us to win. We're just as disappointed as you, but we'll put it right in the next couple of weeks."