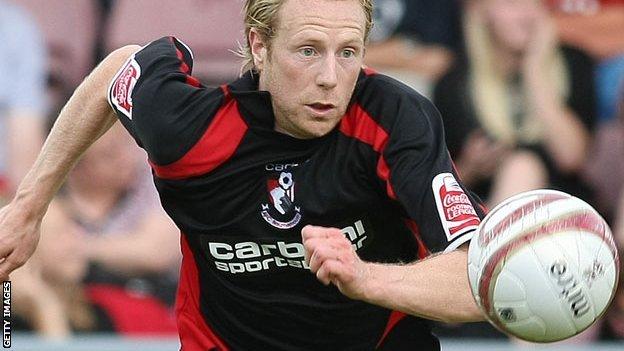 Aldershot brought Wrexham's recent revival to an end with a comfortable win at the Recreation Ground.

After an even first half, Mark Moseley took advantage of a slip by Jay Harris to fire past Joslain Mayebi in the Wrexham goal.

Wrexham had a chance to equalise but Andy Bishop took an air shot after being set up by Robert Ogleby.

And then substitute Jordan Roberts scored a second for the home team with 10 minutes left to make the game safe.

The result was a blow for Wrexham boss Andy Morrell who had seen his team win on their previous two outings after suffering a run of three consecutive defeats.

It was Aldershot's fifth win this term, but they remain in the bottom four after being docked 10 points before the start of the season for going into administration.

"Everyone played their part against a great Wrexham side, who are tipped to be up there.

"I'm delighted for everyone at the club, the fans and the players, because what people don't see is the hard work that goes Monday to Friday.

"Obviously we are judged on a Saturday so to put on a performance like that and after a kick in the teeth on Tuesday, we came out fighting.

"That was probably our most complete performance in terms of passing and moving the ball and the work rate was still there as well."

Wrexham manager Andy Morrell said: "We didn't deserve to win. It wasn't good enough, nowhere near. The difference from Tuesday to today was immense.

"Half the team didn't play to the standards we've set recently and we didn't move the ball quickly enough. I thought Aldershot played well."