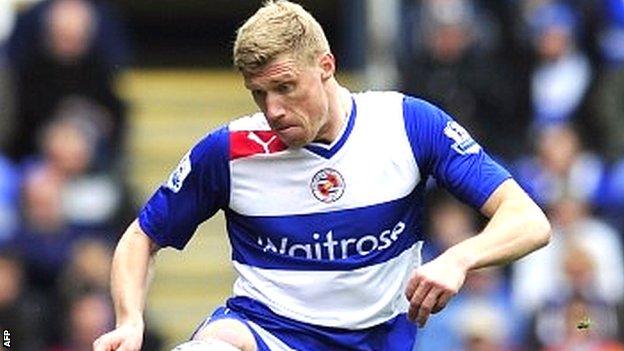 Pavel Pogrebnyak scored twice to help Reading secure a comfortable victory at Derby, who are still yet to win a home game in the Championship this season.

Derby dominated the first half but fell behind after the break as Jordan Obita's free-kick was headed down by Alex Pearce and Pogrebnyak hooked in.

He struck again with a sidefoot from 10 yards when Garath McCleary's cross bounced off Johnny Russell.

Pavel Pogrebnyak scored for the first time since 12 January

Will Hughes curled in for Derby but Nick Blackman fired Reading's third.

The Royals had not conceded in 285 minutes of Championship football coming into the game, but their defence was almost breached in the eighth minute when Russell and Craig Bryson went close.

Hughes and Jamie Ward tested Alex McCarthy and at the other end Hal Robson-Kanu narrowly failed to turn in McCleary's low cross.

Reading could not force Lee Grant into a first-half save, but were ahead after the re-start when Pearce met Obita's set-piece at the back post and Pogrebnyak finished from inside the six-yard box.

The Russian doubled the lead but Reading then conceded for the first time in 365 minutes when Hughes beat MCarthy inside his right-hand post.

Derby pushed for an equaliser but ended up conceding again as Reading broke away and Blackman slid the ball past Grant.