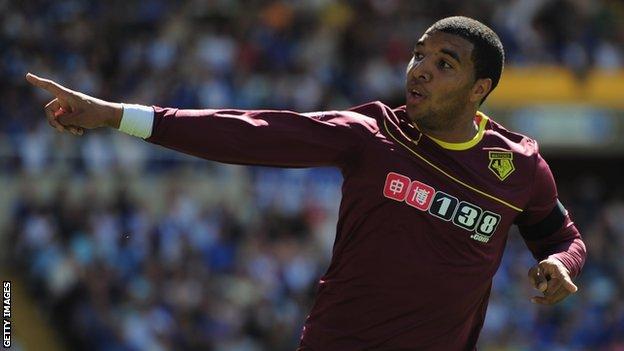 Second-bottom Barnsley were thrashed by Watford to suffer a sixth defeat in eight Championship games.

A Troy Deeney shot gave the visitors the lead before Jason Scotland won possession and fired in to equalise.

Davide Faraoni's volley put Watford back in front before a Fernando Forestieri strike and a long-range Sean Murray extended the Hornets' advantage.

An end to the Barnsley blues

Watford last won a game at Barnsley back in December 2000

Ikechi Anya beat Luke Steele after a long solo run to round off the win and which sees Watford climb to fifth.

With 19 goals, Watford are the Championship's top-scorers so far this season, while the 22 goals conceded by Barnsley is more than any other team.

Lewis McGugan was one of the visiting side's most impressive performers and he set the ball rolling by playing through Deeney, who scored his sixth goal of the season with the Tykes appealing for offside.

Scotland's determination led to Barnsley's leveller but the home side were struggling to contain Watford's attacking threat.

A deflected McGugan cross allowed Faraoni to put the Hornets back in front before Anya's cut-back set up Forestieri to fire into the roof of the net.

Watford keeper Manuel Almunia produced an impressive save to keep out a close-range Martin Cranie header but Barnsley soon went further behind.

"We've been below our standards and against a Watford team you can't even get away with 10% off. But today some players were 30 or 40% off the standards they've set. They've let the group down; they've certainly let the fans down, definitely.

"I want to design a football team that wins games. It's something I'm obsessed with and, at the minute, we're not doing that.

"There's surgery needed and we're going to make that surgery and see where that takes us."

"We know that we haven't been perfect out there. We know that there are some things that need to be done better but in general we go home with a big smile on our face.

"The game went exactly where we wanted it to be.

"We know they were pushing, they were looking to get it back, to come back into the game and we knew that they were going to leave space behind. We just waited, they had their chances too, and then on the counter we took the opportunities and did very well."