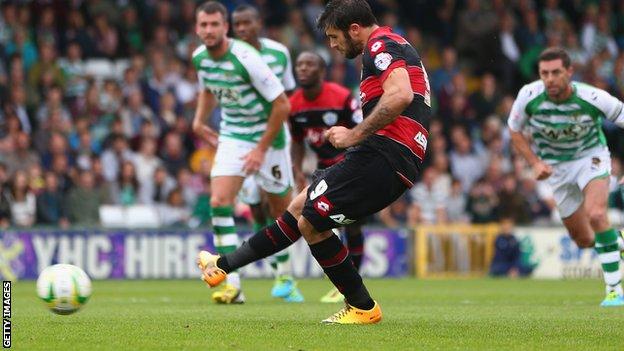 Charlie Austin's second-half penalty moved Queens Park Rangers three points clear at the top of the Championship table and maintained their unbeaten start to the season.

The former Burnley striker converted from the spot after he had been fouled inside the area by Daniel Seaborne.

Harry Redknapp's side have not conceded in 595 minutes of Championship football, since James Vaughan struck the opening goal in Huddersfield's 1-1 home draw on 10 August.

It leaves them in the bottom three with just one win from eight games so far.

QPR are top with 20 points from eight games.

It was the two sides' first ever meeting in a league fixture, having spent last season two divisions apart.

But despite the visitors boasting a wealth of recent Premier League talent in their side, it was Yeovil who started better as Ralls shot wide when in space early on, before Joel Grant's low drive was palmed away by Green.

The QPR keeper was again on hand to deny Yeovil shortly after the restart, tipping wide a strike from the lively Ralls and then keeping out a fierce Williams effort.

Chances for Harry Redknapp's side were few, Austin finding himself largely isolated in attack.

But he was presented with the opportunity to score his third goal of the season when Seaborne was adjudged to have brought him down inside the area.

And Austin sent Yeovil keeper Wayne Hennessey the wrong way from the spot to seal a sixth win of the season for Rangers.

"I'm going to be happy tomorrow because when I watch the video I will see we outplayed a quality team.

"We can't keep being unlucky and we don't want to be relegated as the unluckiest team ever.

"We have to start putting our opportunities away, but we're not always going to have Robert Green in goal against us."

"It was a tough three points and I thought Yeovil were unlucky to lose the game. They played well and put us under pressure.

"I've been around long enough to know that you rarely come to places like this and turn teams over. Yeovil will give anyone a game as this isn't an easy place to come.

"We defended well again and dealt with a lot of set plays late on. Richard Dunne was immense, and so was Rob Green."