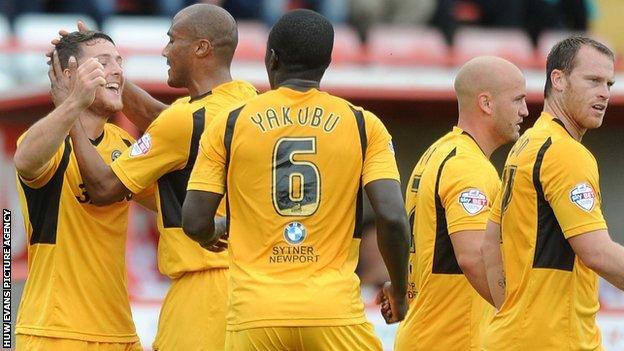 Goals from Conor Washington and Harry Worley helped Newport defy the form book for a morale-boosting win at Exeter.

The home side dropped five places in League Two as the visitors climbed one spot to 11th.

Washington benefited from a long throw-in, smashing in his 23rd-minute effort.

And Washington provided Warley with the chance to hammer the ball into the roof of the net for the score that settled the encounter.

The hosts had their first-half chances, but were unable to take advantage.

Newport took control in the second period and Worley sealed the win.

Newport manager Justin Edinburgh told BBC Radio Wales: "Ever so pleasing. We hadn't won since the 17th of August which seems like a long time.

"But packed in amongst that we've had some real good performances and probably not got what we've deserved.

"But I think we really had to earn our win against a very good Exeter side and I felt we were worthy of our victory."