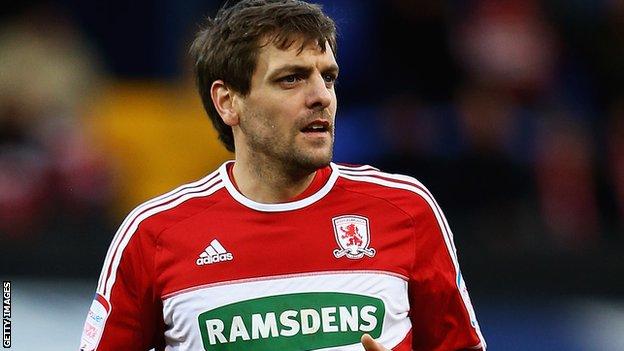 Middlesbrough fought back from two goals down against Bournemouth to lead, before conceding a late equaliser.

Brett Pitman put the Cherries in front from the spot after Tokelo Rantie was fouled, and converted a second penalty when Frazer Richardson handled.

Grant Leadbitter's angled drive put the hosts ahead but Bournemouth equalised via Jonathan Woodgate's own goal before Boro's Rhys Williams was sent off.

Middlesbrough, seeking only their second win of the season and their first at home, were chasing the game from the fourth minute when Williams fouled Rantie inside the area and Pitman smashed the resultant penalty down the middle.

Middlesbrough have drawn five of their last six Championship games. They have not won in seven games and are still hunting a first league maximum of the season at the Riverside

Middlesbrough fans could have been forgiven for fearing the worst at that stage, but the hosts grabbed a lifeline when Kamara - making his home debut - poked a shot against the Bournemouth goalkeeper before stabbing in the rebound.

Kamara was denied a second soon after when his header was blocked by Tommy Elphick but a deserved equaliser did arrive midway through the first half as Carayol cut in from the right and sent a long-range strike into the net.

Boro pushed on in search of a winner as Carayol fired over at the far post, before defender Williams headed wide.

Leadbitter was the next to send a header wide but as the game entered the closing stages the former Sunderland midfielder put Middlesbrough ahead, drilling a low effort into the net from inside the box.

However, Bournemouth levelled late on when Elliot Ward's shot was directed into his own net by Woodgate.

Middlesbrough were reduced to 10 men with just five minutes left as Williams was shown a red card after he pulled back Wes Thomas, but they managed to hold on for a point.

"We can't keep conceding goals. You can't give away three goals at home and expect to win. That's eight in three games now and that is far too many.

"We actually did very well to come from two down to get into a winning position playing some very good football but then we have shot ourselves in the foot."

"It was an excellent performance. I'm certainly not going to complain about losing the early lead because Middlesbrough are a good footballing side and we knew it would be hard and that anything we got here would be a bonus.

"We got a great start and they came back into it and we showed great character after they got back into it.

"We had to change shape a few times, first to get back into it after they went ahead and then again to shut up shop, and I was delighted at the way they applied themselves and did their jobs."