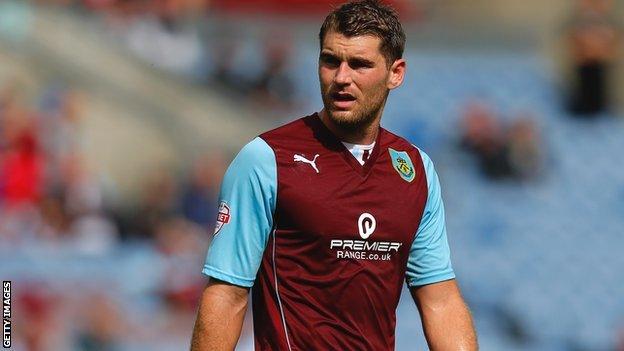 Burnley sent Leeds to their second Championship defeat of the week with a narrow win at Elland Road.

The Clarets took a two-goal advantage into the break after Scott Arfield beat Paddy Kenny at his near post and Sam Vokes followed up his own header to score a second.

Substitute Matt Smith headed in an El-Hadji Diouf free-kick to give Leeds hope but the visitors held out.

Victory for Sean Dyche's side moves them second in the table.

Burnley were good value for their win and could have taken the lead earlier than they did as Arfield and Dean Marney both went close before Vokes forced a superb save from Kenny.

The former Republic of Ireland keeper could do nothing to stop Arfield opening the scoring when he reacted quickest to Sam Byram blocking his initial attempt.

Luke Varney had a great chance for Leeds but he hit his shot from six yards straight at visiting keeper Tom Heaton.

The hosts were made to pay for their wastefulness when Kightly picked out Vokes, and, after Kenny saved his first header, he doubled Burnley's lead.

Diouf and Dominic Poleon both found Heaton in excellent form before Brian McDermott's side gave themselves a chance when Smith headed home.

Captain Rodolph Austin and Poleon both had late efforts but Leeds have now lost three of their last four matches to lie 12th.

"We need someone to grasp the nettle and take up the responsibility of scoring.

"We haven't scored enough goals, especially at Elland Road. It's a worry because someone has to try and take that responsibility.

"I said to the players, the worst thing that can happen has happened. They lost. That's it. I give them the license to make things happen."

"In the first half we were very good, we kept the ball well. It's a tough place to come and we dealt with the feel and emotion of the place.

"We scored two good, effective goals and in the second half we expected a reaction. We had a brilliant chance, Paddy Kenny made a terrific save which revived them, and in the last 20, 25 minutes they got it forward and it was hard to play against.

"I thought our lads stood strong and when needed, Tom Heaton made a truly awesome save."