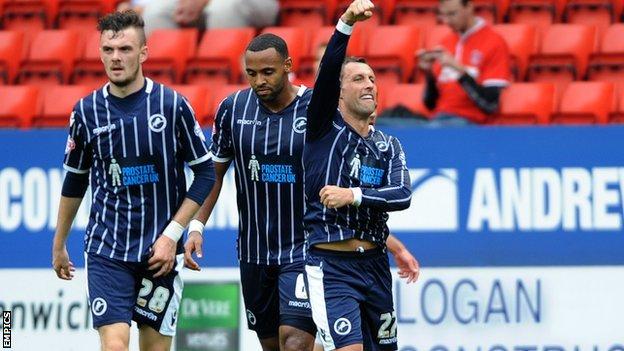 McDonald put the Lions ahead with a long-range strike that took a huge deflection off Dorian Dervitte to beat Addicks keeper Ben Hamer.

Charlton struggled to find a way back into the game and could have fallen further behind with both Martyn Woolford and Liam Trotter going close.

Both sides had started the campaign poorly and went into the match just one point above the Championship's bottom three, form that was reflected in an opening half-hour of limited quality.

But Steve Lomas had registered his first win as Millwall boss with a 3-1 success over Blackpool on Tuesday - a game that had been bottom versus top at the start of play - and it was his side that took the lead when the Addicks' Bradley Pritchard needlessly gave the ball away in midfield and McDonald's strike from 30 yards hit Dervitte to leave Hamer with no chance.

The hosts could have got back into it just after the restart but Dale Stephens miscued his half-volley from the edge of the area.

Steve Morison was introduced for goalscorer McDonald just before the hour mark and he almost had an immediate impact when he flicked on for Woolford but the forward sent his effort just wide, Trotter then forcing Hamer into a good save with a powerful volley from outside the area.

Stewart almost scored a last-minute equaliser but Forde was alert to his near-post effort to ensure his side kept a first clean sheet of the season and took all three points.

"In the first half I really needed more from my players, in respect of creativity.

"Then after the goal we were always chasing the game and although we had one or two situations we couldn't break the deadlock.

"We've got to realise it will be a tough old season for us but we have to believe we can turn it around.

"Millwall were buoyed by their result in the week and they've showed how quickly things can change."

"These are knowledgeable fans and when the lads give that level of commitment and pride for the shirt then they will back you.

"Everyone was on a downer after the Derby game and rightly so. But today the lads have done their job well, and that's satisfying.

"We probably ask Scott McDonald to play slightly out of position on the left but it worked a treat today. He got a bit of luck with the deflection but he earned it.

"It's the first Sunday in a while I'll have a coffee and read the papers."