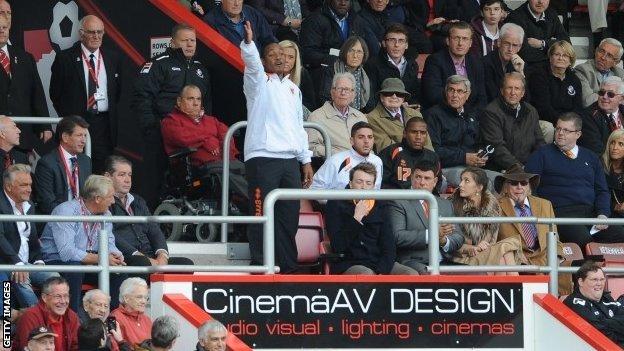 Blackpool boss Paul Ince apologised after a bottle he threw during a 2-1 Championship victory at Bournemouth inadvertently hit a female supporter.

The 45-year-old was sent to the stands for his reaction to his table-topping side missing a late chance.

"We thought [Ince being sent from the dug-out] was harsh because it bounced through a barrier, but even still we're obviously not happy with it," said Rae.

"The fourth official made the decision to send him to the stand so we just move on from it.

"To be fair, the manager went over and apologised to the lady immediately as it actually hit her on the foot, I think, and she's accepted his apology."

Victory means Blackpool remain unbeaten in the Championship this season.

The visitors had defender Jack Robinson sent off on the hour before Nathan Delfouneso's late miss prompted Ince's angry reaction.

The former England midfielder refused to carry out post-match interviews.