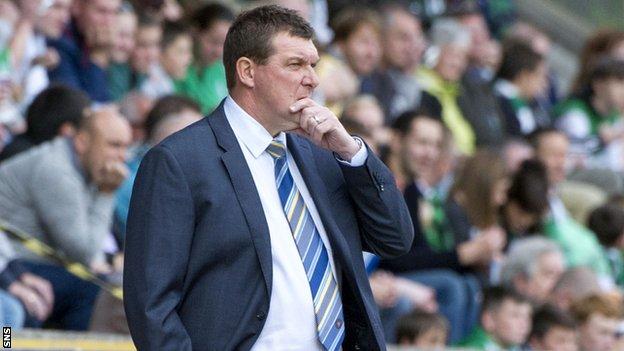 St Johnstone boss Tommy Wright admits he is disappointed his side were not more ruthless against Hibernian.

The Saints suffered their first loss at McDiarmid Park since November as Pat Fenlon's men recorded a 2-1 victory thanks to goals from debutant Paul Heffernan and James Collins.

"We had opportunities but we were wasteful particularly in the last third," Wright told BBC Scotland.

"The final ball and our decision making let us down when we were on top.

"We started the game very well but we allowed Hibs to come back in to it."

Stevie May produced a stunning effort from outside the box to put the hosts ahead in the first half.

The 20-year-old notched his fourth goal of the campaign and had more chances to score, but Wright insisted there are other parts of his game which he needs to develop.

"He took the goal well but he's still got a lot to do," he added. "There were other aspects of his game that I wasn't so happy about."

Hibs debutant Heffernan, who had never tasted victory over the Saints, equalised before Collins struck in the second half, and the St Johnstone manager was less than pleased with the way his side went behind.

"The second goal we conceded was poor from our point of view," Wright said.

"We lost a bit of shape and discipline after that and Hibs, after going 2-1 up, were probably the better side.

"They've got a lot of midfield players that can pass the ball and the created a few more opportunities than what we have liked."

Fifth-placed Saints will be hoping to avoid going four games without a win when they travel to face Celtic next Saturday.