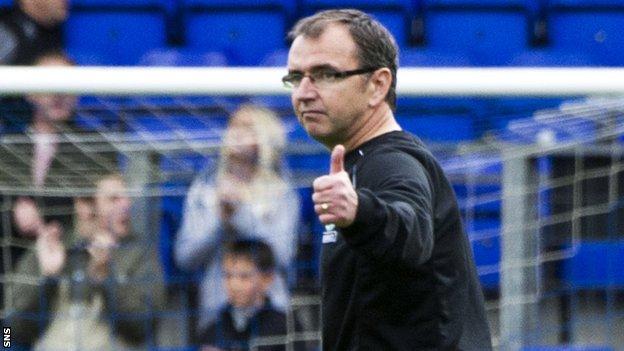 The Leith outfit found themselves a goal behind courtesy of an excellent Stevie May strike, but the visitors fought back through Paul Heffernan and James Collins to secure a 2-1 win.

"I'm delighted, it's a big three points for us," he told BBC Scotland.

"The second half performance was the best we've played this season, and I thought we deserved to win the game.

"In the first half there was not a lot in it, but in the second half I thought we played tremendously well."

It was Hibs' fourth consecutive game without being beaten and the result has certainly eased the pressure on boss Fenlon since the ignominious 9-0 aggregate loss to Malmo in the Europa League qualifiers and the defeat to an inexperienced Hearts side in the Edinburgh derby.

Fenlon, however, was quick to refute any suggestions that the recent run of form has vindicated the faith shown in him by the club's board.

"I don't believe in any of that to be honest," he continued. "You're a football manager, you have to take the good with the bad so, you just get on with it. I'm delighted for the players, we're on a half-decent run and we need to keep that going next week against St Mirren."

It was Collins' first goal in six league games while it was Heffernan's first goal and victory against the Saints in six attempts.

"I'm delighted for both of them," Fenlon said. "It wasn't James' best game to be honest, but I said to him after the game, he worked tremendously hard like he does most weeks and got a break with the goal.

"Heffernan is just a natural finisher who's calm in front of goal. Obviously when both your strikers score goals it's a decent day."