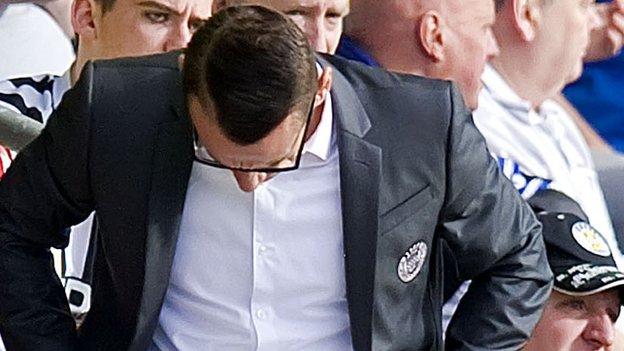 McCall's men inflicted a third straight loss of the season on their hosts courtesy of former Saints striker John Sutton.

"As a manager there are always challenges," he told BBC Scotland.

"If we'd come back from Macedonia with Scotland with a loss, it'd be all doom and gloom. Sometimes you're just one game away from turning things around.

"That's what I'm sure Danny's message is to his players and they've got a good enough squad to things around.

"We all know as managers how difficult it is - even when you're winning."

Lennon's men have yet to register a victory in the Scottish Premiership and were behind when Sutton rose to put the visitors in front before the Steelmen created further chances to put the result beyond doubt.

"We were worthy of the win in the end I think," McCall added.

"I thought the second half was a bit like last week and the week before where we've been ahead and not killed teams off.

"We've had a one-on-one, we've hit the bar from a corner and [Bob] McHugh has flashed one wide.

"St Mirren were obviously going to come at us in the second half but I thought we defended strongly, we limited them to very little and we deserved to win."

Controversy arose when 'Well midfielder Keith Lasley was judged by referee Craig Thompson to have fouled Conor Newton in the box. However, after conferring with his linesman, Thompson awarded a free-kick, much to the relief of McCall.

"I couldn't see it," McCall continued. "If the referee is on the spot and he's given it, you think he gets it right and it's a penalty. But Las [Lasley] was adamant that it was a least a yard outside the box and thankfully the linesman flagged it up.

"But I can understand St Mirren being disappointed once it has been given but the right decision was made in the end."