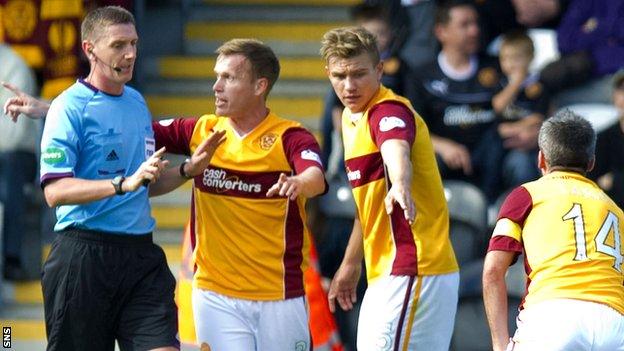 St Mirren manager Danny Lennon thought the officials had displayed weakness by changing their decision to award a penalty to his side against Motherwell.

Referee Craig Thomson initially pointed to the spot after a tackle on Conor Newton before awarding a free-kick.

"The ref and his assistant seemed to be very comfortable with the decision," Lennon said .

"But, once a group of Motherwell players start to get around him and heckle, they've got to be stronger."

There will be a lot of focus on Danny Lennon's position again this week. It hurts and nobody wants to hear that

Keith Lasley's tackle on Newton came before a winning goal for Motherwell that leaves St Mirren without a win this season.

There had been speculation about Lennon's position as manager before the game and he admitted that it was a difficult time.

"There will be a lot of focus on Danny Lennon's position again this week," he told BBC Scotland.

"The only focus I have is preparing that group physically and mentally and tactically.

"It hurts and nobody wants to hear that, your loved ones, etc. We're all human.

"But I'm the leader of this group and I'm standing up and want to be counted.

"I take full responsibility for what we're putting out there but also take heart from what that group delivered."

Lennon had changed his system and thought the only time it failed to work was for the goal scored by John Sutton.

"We had three centre-backs playing in a new system and that was probably the only ball they didn't deal with," he said.

"I thought right up to the last kick of the ball, that game was very much in the balance.

"Other than keeping a clean sheet and scoring a goal, I couldn't have asked any more of the group.

"I felt we got a lot of our identity back in terms of possession and a lot of good balls coming into the box.

"I've asked them to apply themselves again on Monday because we're getting ever so close to turning this around."