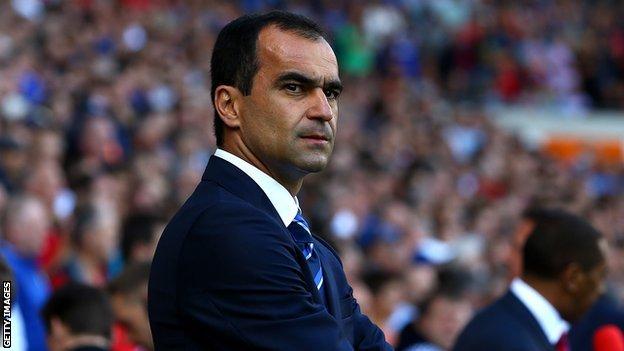 Everton staged an evening with a Spanish-themed "Fan Fiesta" at Goodison Park in honour of manager Roberto Martinez ahead of the visit of Jose Mourinho's Chelsea.

Paella and other delicacies were available in the designated Park End fan zone - although the added "attraction" of Julio Iglesias crooning "Begin The Beguine" over the loudspeakers was too much for many to swallow.

At the end of a thunderous evening at this grand old stage, Martinez was the toast of Goodison Park and the sweetest taste around was that of a landmark victory over one of the Premier League title favourites.

It may be stretching the point to suggest Martinez's appointment has been greeted with suspicion by some Everton fans, but there is no doubt he has some convincing to do for those who wonder: Is he the manager with the pedigree of an FA Cup winner at Wigan, or the man whose tactics took them into the Championship?

This is what made this win - secured by Steven Naismith's header in first-half stoppage time amid a performance that combined key elements of what Everton possessed when Martinez arrived and the qualities he is trying to add - so significant.

To take three points from Mourinho, who had never previously lost at Goodison Park, and to have Everton's players perform with such determination and commitment for their new manager was a strong early statement in Martinez's favour.

It was a result and a performance guaranteed to send his stock rising among Everton fans and ease the doubts of those questioning whether he was the right man to succeed David Moyes.

There is no doubt there is a transition in styles under way at the Blues. Martinez has to perform the trick of taking the best of the Moyes era, the quality and resilience that propelled them to sixth place in the Premier League last season, and bolting onto it the studied passing style from which he refuses to deviate.

The danger is that such a switch in emphasis could see the baby thrown out with the bathwater, and there is no doubt there have been occasions in Everton's opening games when some of the passing has almost been for effect, and the final product plodding and lacking in punch.

Martinez is aware of the adjustment Everton's players - and indeed supporters - are having to make but an unbeaten start to his reign and a win against one of the big-spending superpowers will only increase confidence in his methods.

It does not come without its problems, though, and Everton could have been put away in the first half as Chelsea, especially new signing Samuel Eto'o and recent arrival Andre Schurrle, wasted a succession of opportunities.

And while Martinez's commitment to passing football in all areas is commendable, it should not stretch to goalkeeper Tim Howard fiddling about in his own area before presenting possession to Schurrle.

It was an incident that brings us neatly on to the game's outstanding performer - and what might just be one of the shrewdest pieces of transfer business of the window, completed for free amid the mad dash to spend millions.

After Howard's howler, all that remained was for Schurrle to find Eto'o to complete the formalities in front of an open goal at the Gwladys Street end. The German's pass may have lacked weight, but it still took a magnificent block from Gareth Barry to deflect Eto'o's shot over the top. If ever a tackle was the equivalent to a goal, this was it.

It epitomised a performance from Barry that was described by Martinez, with some justification, as "a masterclass."

Barry may have been surplus to requirements at Manchester City but here he demonstrated all his footballing street wisdom and experience. From assured touches in the opening minutes, through crucial interventions to break up Chelsea attacks, right through to a key role as Everton retained possession in the closing minutes, Barry was flawless.

And with James McCarthy getting a run-out and Chelsea loanee Romelu Lukaku to come when Everton travel to West Ham next week, it was understandable that Martinez declared his pride at three points as well as optimism for the future. Not to mention a third successive league clean sheet for a manager who was not a regular dealer in that currency at Wigan.

Chelsea wasted those first-half chances but towards the end it was Everton who looked more likely to add goals, combining endeavour and defensive commitment with the desire to keep the ball that will increasingly become their trademark.

Just further forward from Barry was the teenager who is the new jewel in Everton's crown, Ross Barkley.

Martinez trusts him implicitly, which did not always seem to be the case under Moyes. The Spaniard is willing to take Barkley's mistakes on the chin in exchange for the fearlessness of youth and a wonderful natural talent.

Barkley's judgement is still a work in progress and one over-ambitious misplaced pass ended with Eto'o heading a great chance wide - but his position just behind the striker reduces the risk in his play, gives him freedom and suits him perfectly.

Martinez said: "The more you watch him the more you fall in love. He has got great balance, right and left, and great awareness of the space around him. His decision-making is still developing but potentially he is a very special footballer."

Everton had an element of fortune as Chelsea singularly failed to show the ruthless instinct that was the calling card of Mourinho's teams in his first spell - but few could begrudge them the win and Goodison Park lapped it up amid raucous scenes after the final whistle.

And the biggest irony of all was that as Chelsea's misfiring strikers queued up to miss, with Fernando Torres producing an utterly hapless appearance as a substitute, a possible alternative in Lukaku - ineligible to play against his parent club - was taking the applause of Everton's fans before kick-off.

With the transfer window closed to a satisfactory conclusion, despite the loss of Marouane Fellaini to Manchester United for £27.5m, Martinez regarded this as a second start to Everton's season (and effectively his reign) after the welter of speculation he was forced to endure about possible departures.

And as second starts go, this was almost perfect.