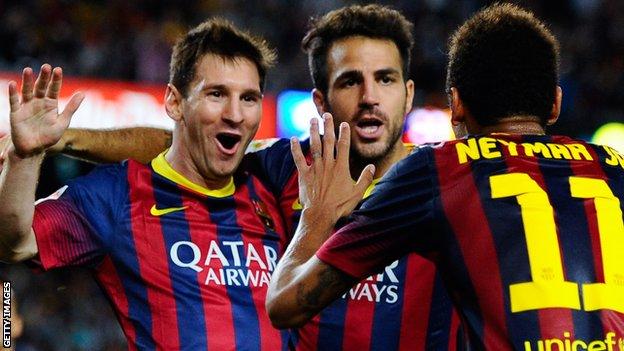 Barcelona substitute Alexis Sanchez struck in the fourth minute of added time to snatch a 3-2 victory against Sevilla and maintain the champions' winning start to their title defence.

Barca let slip a two-goal lead and were seconds away from dropping their first points of the campaign.

Goals from Dani Alves and and Lionel Messi put Barcelona 2-0 up with 15 minutes left.

But Ivan Rakitic and Coke stunned the hosts to level before the winner.

Messi again proved decisive as he beat several defenders to get to the byeline before his cross fell to Sanchez and the Chilean poked the ball into the net in the dying seconds.

A rare Alves header against his former club put Barca ahead in the 36th minute before Messi looked to have made the game safe when he clipped a Neymar centre high into the net with 15 minutes left.

It was the World Player of the Year's sixth goal in three La Liga appearances this season.

Rakitic pulled a goal back when he smashed the ball past Victor Valdes in the 80th minute and Coke stole in to volley the equaliser 10 minutes later.

Sanchez's late intervention ensured Barca have a perfect 12 points from four matches, level with Atletico Madrid, who won 4-2 at home to promoted Almeria earlier on Saturday.

"We managed to score an important goal in the last minute. We scored due to our heart," said Sanchez.

"Now comes a difficult time with the Champions League as well and we need to know how to win."