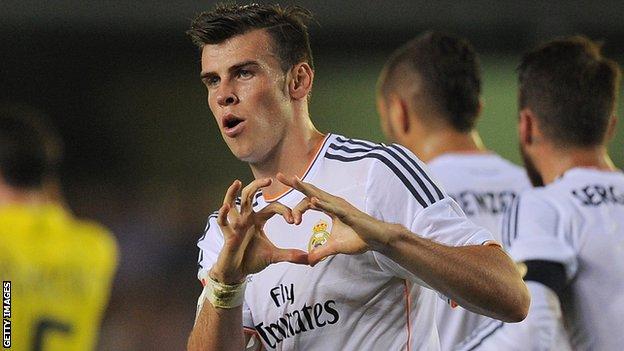 World-record signing Gareth Bale scored on his Real Madrid debut but his new side were held to a 2-2 draw by Villarreal.

The Wales forward, an £85.3m summer signing from Tottenham, played 62 minutes before being replaced.

Bale, 24, levelled with a tap-in on 38 minutes after Cani had opened the scoring for the hosts.

Bale's price tag meant he overtook new team-mate Ronaldo as the world's most expensive footballer. The Portuguese joined Real for £80m from Manchester United in 2009.

He has not played a full match yet this season because of a foot injury and managed 32 minutes in Wales' 3-0 defeat by Serbia on Tuesday.

But manager Carlo Ancelotti opted to hand the Welshman his first start of the campaign, playing him in a right wing role alongside Ronaldo and Isco.

And, after a quiet start, Bale started to repay the money spent on him by cancelling out Villarreal's opener, converting Daniel Carvajal's pull back from inside the six-yard box.

The former Southampton left-back almost scored a second after the break, firing inches over from long range, before he was replaced by Angel Di Maria after the hour mark.

The draw was Real's and Villarreal's first dropped points of the season, with Barcelona and Atletico Madrid the only sides left in the league with a 100% record.

Real visit Turkish side Galatasaray in the Champions League on Tuesday.

Bale, who joined Spurs for £10m from Southampton in 2007, scored 26 goals last season as he was named both the Professional Footballers' Association's and Football Writers' player of the year.