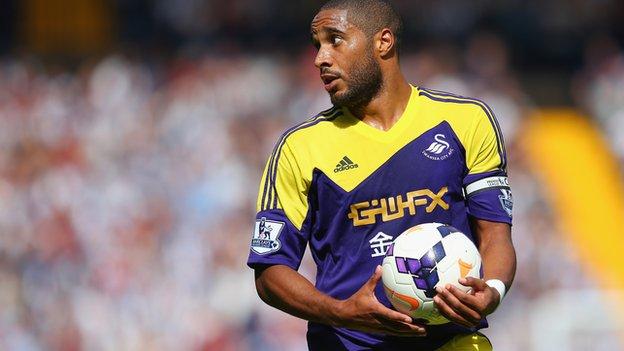 Crystal Palace are without midfielder Kagisho Dikgacoi, who serves a one-game ban after his red card last weekend.

Fit-again duo Jerome Thomas and Jonathan Parr could be involved, but Joel Ward (calf) is set to miss out.

Swansea captain Ashley Williams is doubtful with an ankle injury that ruled him out of their win in Valencia.

Ben Davies and Jonjo Shelvey are set to return after beginning on the bench in midweek but Pablo Hernandez remains sidelined by a hamstring problem.

Demolishing Valencia in their own backyard was another major landmark for Swansea but after the plaudits Michael Laudrup and his players rightly received they must now concentrate on domestic matters.

"These are the games that Crystal Palace have to win if they are going to stay up.

"Palace will be ready for Swansea - I can imagine their manager Ian Holloway saying to his players 'look, this lot will be dead on their feet here - let's have a real go'."

The memories from that magnificent performance in the Mestalla will linger for a long time but the edge could be taken off the occasion if Premier League points aren't taken in the less glamorous surroundings of Selhurst Park.

Few observers will be surprised to see Palace in the relegation zone after a tough start to the season but the Eagles may take inspiration by taking a peak around the door of the visiting dressing room.

It's only two years ago that Swansea were in an almost identical position, arriving in the big time via the play-offs with a squad lacking big names.

Despite a difficult start, they are now embarking on their third season at the highest level with a major trophy in the cabinet and European football to enjoy.

The way Ian Holloway's men accounted for Sunderland last month showed just how important home advantage will be for the Eagles this season. Selhurst Park is not a typical Premier League stadium these days and Palace have to make the most of the environment.

Holloway celebrated victory against the Black Cats with an impromptu jig in the technical area but we'll be denied any touchline antics this weekend as he completes a ban for complaining about the refereeing during Palace's defeat against Tottenham, which resulted from a Roberto Soldado penalty.

"My opinion doesn't count because the rules are the rules" was his more restrained view of another spot-kick decision which led to last week's 2-0 loss at Old Trafford and a red card for Kagisho Dikgacoi.

However, it's already clear the Premier League is going to be a livelier place again for Holloway's presence and you do wonder if he feels he has unfinished business - his Blackpool team were relegated with 39 points in 2011 - which would have guaranteed survival in all but one of the last 10 seasons.