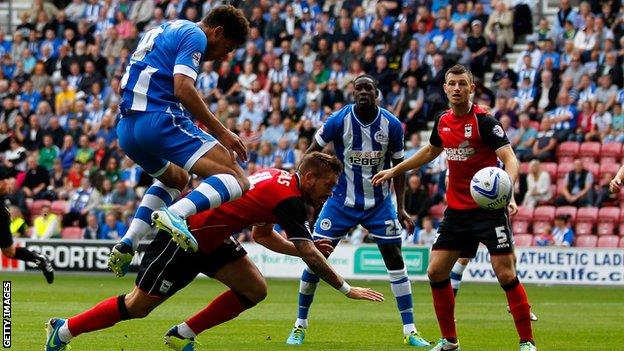 Wigan Athletic moved into the top half of the Championship as goals from Ryan Shotton and Nick Powell secured victory over Ipswich.

The Latics took an early lead when Shotton headed in Powell's corner.

Wigan keeper Scott Carson then produced a number of fine saves to protect their advantage, most notably keeping out Christophe Berra's long-range strike.

Powell made the points safe late on when he tapped home from close range after an error by keeper Dean Gerken.

A third league win of the season moved Wigan up to 11th in the table, while Ipswich are 14th.

Wigan are trying to juggle their Europa League commitments with mounting a challenge for promotion back to the Premier League.

Ipswich have only played Wigan at the DW Stadium on three occasions, losing on each one.

They earned a credible goalless draw at Belgian side Zulte Waregem on Thursday - a game in which Shotton made his debut following a loan move from Stoke City.

He impressed in that fixture and did not take long to make an impression against Ipswich, opening the scoring after only 12 minutes.

Manchester United loanee Powell delivered a corner to the far post where Shotton was on hand to head the ball into the back of the net.

But, despite falling behind, Ipswich were the better side in the remainder of the first half. Wigan defender Ben Watson produced a fine block to deny Daryl Murphy from scoring before David McGoldrick headed just wide.

Wigan twice had Carson to thank for protecting their lead before half-time as the former Liverpool goalkeeper first produced a fine reaction save to keep out Murphy's close-range effort and then tipped Cole Skuse's rasping drive around the post.

The home side, though, always looked capable of creating a chance from nothing and should have added to their advantage just before the hour, but the unmarked Thomas Rogne somehow headed wide from close range.

Carson again came to Wigan's rescue when he got a hand to Berra's fierce strike from distance and pushed it away for a corner.

It was to prove a telling save as the home side wrapped up the win soon after when Powell robbed Ipswich keeper Gerken of the ball and rolled the ball in.