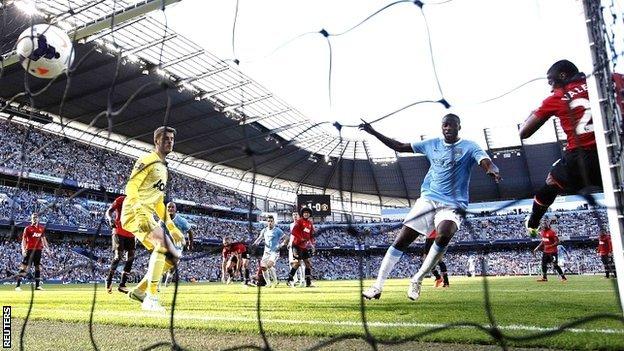 In contrast to the despair of his opposite number, it was a day of delight for new City boss Manuel Pellegrini as he watched the rampant Blues make a powerful statement about their Premier League ambitions.

Sergio Aguero and Yaya Toure gave City a commanding half-time lead and any slim hopes of a United recovery were snuffed out by further goals from Aguero and Samir Nasri within five minutes of the restart.

Wayne Rooney's late free-kick offered nothing in the way of consolation for Moyes or United on a day of embarrassment that will sit uncomfortably alongside City's 6-1 win at Old Trafford two seasons ago.

United may have been without Robin van Persie because of a groin strain but the absence of one player - no matter how significant - cannot account for the manner in which Moyes' side were utterly outclassed.

This was arguably a more emphatic win than that Old Trafford thrashing, without the freakish element and simply the result of City's vast superiority in all areas.

Moyes, who never won a derby at Liverpool in 11 years as Everton manager, did not find the Etihad any more forgiving as City picked United apart in midfield, where Toure looked in a different class to United's £27.5m new boy Marouane Fellaini, and in defence as Aguero tormented Nemanja Vidic and Rio Ferdinand.

Pellegrini insisted this was a game City had to win - this they did and with the sort of performance that put down a marker for how the Chilean wants his team to play.

For Moyes, it means he has emerged without a win from the three toughest games of his opening Premier League phase as United manager, drawing at home to Chelsea and losing at Liverpool and now City.

City had already taken control long before Aguero put them ahead after 16 minutes. It was a move typical of so much that was produced by Pellegrini's men as Nasri linked with Aleksandar Kolarov, whose cross was volleyed home instinctively by the Argentine.

Rooney was virtually shouldering United's burden alone and with mounting frustration. It was no surprise when it boiled over and he was booked for a challenge on City captain Vincent Kompany, but at least he was showing the intent and desire markedly absent in the rest of his colleagues.

The only surprise was that City were still only one goal ahead as the first half drew to a conclusion but they got the lead their complete dominance deserved in stoppage time when Toure was unmarked at the far post to turn in Alvaro Negredo's touch from Nasri's corner.

If Moyes harboured hopes that the respite of the interval would provide some inspiration for his hapless United team, they were shattered within minutes of the restart as City quickly added two more goals to turn this derby into a rout.

United's defence went missing in the 47th minute when Kolarov and Negredo combined and the predatory Aguero was once more the beneficiary with a simple side-footed finish.

City were swarming all over United and the fourth came three minutes later when Jesus Navas crossed from the right for colleagues who were queuing up to score, the outstanding Nasri completing the job with a perfect volley.

In what almost seemed like an act of damage limitation, Moyes immediately introduced Tom Cleverley for Ashley Young, who had been arguably the worst among a whole collection of shocking United performers.

City, understandably, eased off and at least allowed United sight of goal, with Joe Hart saving well from Fellaini and Patrice Evra striking the upright with a powerful header.

Rooney deserved something for his efforts and he got it with a brilliant free-kick that made him the highest scorer in Manchester derbies 11 goals - but there was nothing else to please United on a day when they felt the full force of City's power.