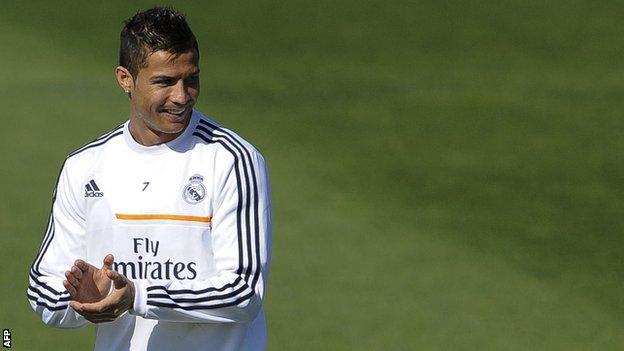 Cristiano Ronaldo says he wants to stay at Real Madrid for the rest of his career after signing a new contract with the Spanish giants until 2018.

The Portugal forward, 28, was linked with a return to former club Manchester United over the summer.

"Manchester United is the past. Real Madrid is now my home," he said. "I hope that I'm here until I retire. This is a great club."

Spanish reports suggest he will earn an annual salary of 17m euros (£14.25m).

His previous contract at the Bernabeu was due to expire in 2015.

The Madeira-born star was also voted as the world's second best player, behind Barcelona's Lionel Messi, in 2011 and 2012.

As well as a return to Old Trafford, he was also linked with a switch to big-spending French club Monaco.

"I respect all the clubs who ask about me," he said. "But they always know that my decision, that my only goal, is to be here and to play at this club until, maybe, the end of my career.

"I'll be here five more years. I just want to win trophies for this club."

Real president Florentino Perez, who sat alongside Ronaldo in a media conference on Sunday, labelled the new deal as "a great day" for the nine-time European champions.

"We have made the dream of all Madridistas," said Perez. "Cristiano Ronaldo and Real Madrid will remain forever."

Ronaldo was replaced as the planet's most expensive player when Welshman Bale, 24, completed his switch earlier this month.

The pair both started as Real drew 2-2 at Villarreal in Bale's first appearance for last season's league runners-up.