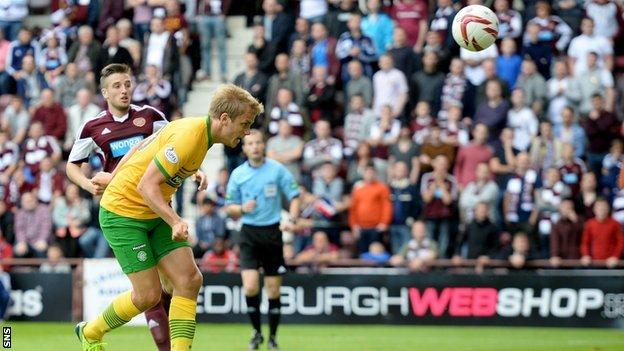 Celtic striker Teemu Pukki is eager to feature in Wednesday's Champions League group opener against AC Milan after marking his debut with a goal.

The Finn came off the bench to head Celtic's third in

"It is a big thing for me to play again in the Champions League," said Pukki.

"Last year, I also played with Schalke but not as a starting player. So I'm hoping to play a lot of games in the Champions League."

I did not see him play very much, Gary Hooper, but I heard he scored a lot of goals

Pukki is hopeful of a good showing in Europe, with

"I have only been here two days so I don't know everyone, but I think we've a very good squad and I think we have a good chance," said the 23-year-old.

"It is not such an easy group, but of course we believe in ourselves and we're looking to go through."

"I hope to score a lot of goals," added 26-times capped Pukki.

"I did not see him play very much, Gary Hooper, but I heard he scored a lot of goals. We also have other strikers here who can score, so it is not only my job.

"It's always good to score and a good result as well.

"It is a good league. A very physical game. It was not an easy game for us, but we got a good result."