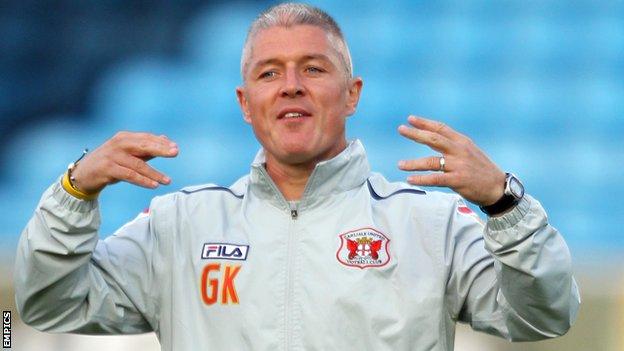 Carlisle United caretaker manager Graham Kavanagh has said he wants the job on a permanent basis.

The Irishman, 39, led the League One side to a first win of the season with - his first game in charge.

"I do want to take it forward. I would love to be given the opportunity to get it," Kavanagh told BBC Radio Cumbria.

"Today was about doing a job for the football club - asking the players if they could perform to the levels we ask them and to a man they did that.

"We got the result and we move forward and hopefully it's the start of bigger and better things."

Former Stoke, Cardiff and Republic of Ireland midfielder Kavanagh has never managed a team but has had a coaching role at Brunton Park since January 2009 and eventually became Abbott's assistant.

Abbott, 49, was the third longest-serving manager in English professional football, having taken charge in late 2008.

"I want to say publically a huge thank you to Greg," said Kavanagh.

"I've leaned on him a couple of times this week, that's the manner of the man.

"I spoke to him [on Saturday] morning about one or two players and stuff like that. He's at the end of the phone, he could quite easily blank me.

"He could quite easily say 'I hope Sheffield United beat us', but he's not that type of character."

Carlisle's first league win of the season moved them on to five points from seven games, two points clear of the relegation zone.

"I think we need to get away from the difficult circumstances and the negativity and make this place as positive as it can be," said Kavanagh.

"Let's try to get this juggernaut rolling again in the right direction."