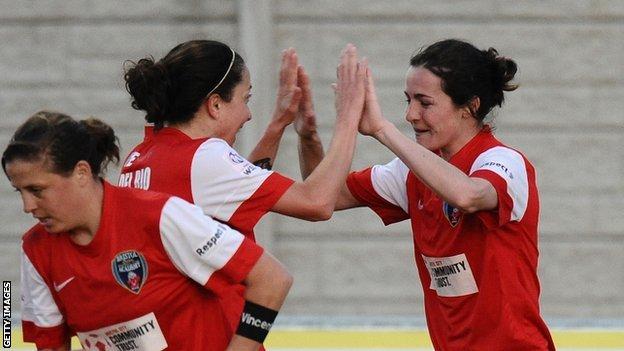 Bristol Academy came from three goals behind to dramatically beat Doncaster Belles 4-3 and set up a Women's Super League title decider against Liverpool.

Second-placed Academy's amazing win took them to within two points of leaders Liverpool going into their final-day showdown on 29 September.

Spanish striker Natalia scored a hat-trick, including the winner, after Academy had trailed 3-0 at half-time.

They are three points behind Liverpool, but with the Reds playing Bristol, it means Arsenal cannot overhaul both sides.

The Gunners will have to face Everton on the final day without left-back Emma Mitchell after she was sent off for a second half foul against Blues.

In the WSL's other Sunday encounter a Nikita Parris goal gave Everton a 1-0 victory over Lincoln.

The title decider will take place at Liverpool's Halton Stadium, on 29 September. The hosts will clinch the title with a win or a draw - but Bristol will be champions if they win.

It is 10 years since a team other than Arsenal have won the English title, with Fulham winning the women's Premier League in 2003.

Liverpool finished bottom of the WSL in its first two seasons but have been front-runners this term after a huge investment from the club's American owners.

There have been some incredible encounters in the WSL this season, but none more so than this classic game of two halves.

The bottom-of-the-table Belles did most of the first-half attacking and went ahead in the 34th minute.

Striker Jess Sigsworth chased a long ball out of defence to shoot past goalkeeper Siobhan Chamberlain.

And in the last minute of the opening half a clever 20-yard lob by defender Leandra Little sent Donny three goals clear.

The biggest upset of the season looked on the cards, but Bristol's fightback started with Natalia scoring from 10 yards two minutes after the break.

Natalia then poked home a close-range 66th-minute shot to cut the deficit to a single goal.

Substitute Ann-Marie Heatherson levelled the scores when she tapped in Natalia's 82nd-minute cross.

And Natalia forced in her third a minute from time to give Bristol the most dramatic of comeback victories.

After failing to score in each of their previous two games, Arsenal took just three minutes to find the net as midfielder Nobbs drove in an 18-yard shot.

Birmingham responded well and had the better of the possession as the first half progressed.

As they pressed for an equaliser midfielder Jade Moore had a 28th-minute shot turned over the bar by goalkeeper Cherie Rowlands.

Blues continued to look the better side, though three minutes before the break keeper Rebecca Spencer had to react smartly to deny Nobbs a second goal.

Spencer was unluckily beaten as winger Yankey claimed Arsenal's second goal with a big deflection off the defensive wall from her 58th-minute free-kick.

There was drama in the 73rd minute, Mitchell seeing red for a foul on Kirsty Linnett but then Rowlands saved the resultant penalty by Isobel Christiansen.

Despite being down to 10 players the Gunners held on with no real scares to claim a victory that keeps them in with a chance of a second-place finish.

A goal from Nikita Parris was enough to give Everton a narrow win at home to Lincoln.

The visitors made a bright start and Everton goalkeeper Rachel Brown-Finnis had to make a sixth-minute save from winger Jess Clarke.

Lincoln created another chance in the 24th minute, this time striker Carla Cantrell, after having a shot saved by Brown-Finnis, shot wide from a good position.

Toni Duggan had a decent opportunity for Everton but from 10 yards the striker shot straight at goalkeeper Karen Bardsley.

Brown-Finnis was harder pressed by Cantrell's 20-yard drive three minutes before half-time, the keeper having to make a flying save.

The Toffees broke the deadlock 17 minutes into the second half, striker Parris heading home a Lucy Whipp cross.

Midfielder Michelle Hinnigan almost doubled the lead with a good effort that flew narrowly over the bar.

At the other end defender Meaghan Sargeant sent an 87th-minute effort just over the top as Lincoln tried in vain to force an equaliser.