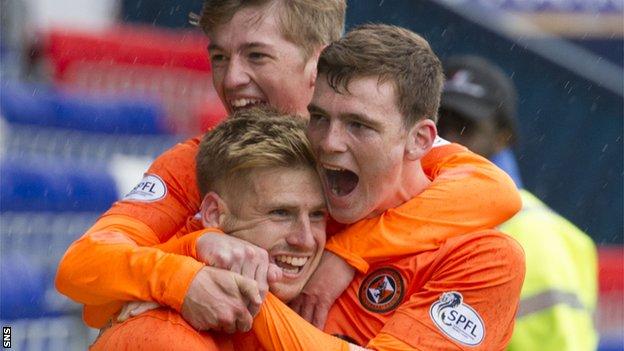 Jackie McNamara praised the forward play of his Dundee United side at Ross County, despite feeling they should have won by a bigger margin than 4-2.

"I thought it could've been more convincing to be honest," manager McNamara told BBC Radio Scotland.

"The young players up front had the pace, decision-making and ability to cause Ross County problems."

Derek Adams' County side did do their best to make up for some poor defending by pulling two goals back in the final quarter of the match.

But the Tangerines held out and move to sixth in the Scottish premiership with a first away league win of the season.

United had moved mountains financially to bring Blackburn Rovers striker David Goodwillie to Tannadice on loan, but the Scotland international only had a place on the bench in Dingwall.

Instead, McNamara opted for the bigger frame of Turkish forward Nadir Ciftci to lead the line and it paid off, with the former NAC Breda player putting in a sterling performance.

"It's taken a bit of time to get him into the starting eleven," McNamara said. "But you see the difference there when he's holding the ball up and the players round about him.

"We look very pleasing on the eye when we're moving forward. The ones that started have merited the chance of starting the next match."

A major talking point in the game came in the 27th minute, when United held a 2-0 lead.

Ross County's Dutch striker Kevin Luckassen dispossessed Sean Dillon in the penalty area and appeared to be subsequently hauled down by the Irishman.

However, referee Brian Colvin decided no spot-kick should be awarded or card shown.

"We got a bit of a break at the end of the first-half with that decision," added McNamara. "I emphasised at half-time that we don't give the referee any chance to even things.

"Sean Dillon and him had a hold of each other and he's gone down and it could've been given."