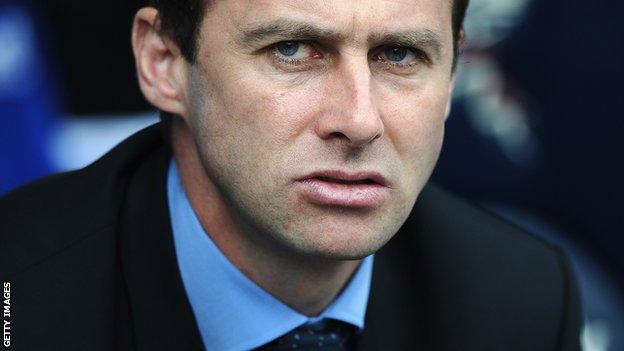 Manager Dougie Freedman is confident Bolton can recover from their worst start to a league season for 50 years.

Wanderers were on Saturday and have collected just two points from their first six Championship matches.

Only Millwall lie beneath Freedman's Bolton in the table.

"It's disappointing and I said in my programme notes I'm surprised at where we are, but it doesn't suggest it's going to go on," said the Scot.

Bolton have made their worst start to a league season for 50 years. The 1963-64 campaign began with five successive defeats and ended with the club being relegated from the top division.

He told BBC Radio Manchester: "In patches, we're playing decent stuff and we've had decent performances, so that would suggest it won't go on for too much longer.

"When you're in this position you've got to not concede early goals and not concede from set pieces. Every single small mistake is being punished right now.

"Once we stop that and get back to keeping a few clean sheets, life becomes a bit easier when you're attacking because you attack with a bit more freedom."

Defender Matt Mills made his first league start since December 2012 against Leeds.

The 27-year-old has waited patiently for his opportunity and is hopeful of playing a key part in Bolton's revival.

"I got an injury and then the team went on a fantastic run," said the former Reading and Leicester centre-back.

"I'm not going to knock on the manager's door if I'm not in the team and the team's winning. I was buzzing for the lads.

"When results aren't going so well, the manager will make changes and all you can do is come in and try to do your job as best as you can.

"You can't feel sorry for yourself. It's a case of dusting yourself down, getting together and going again."