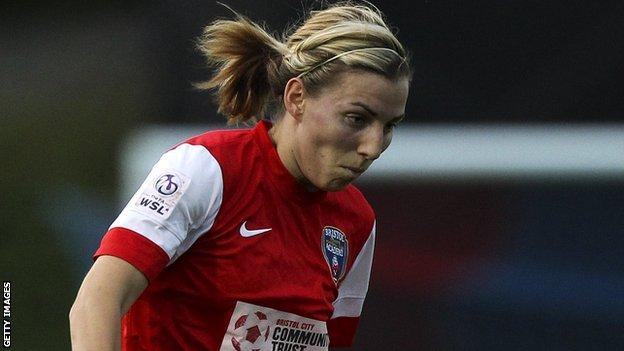 Bristol Academy defender Grace McCatty says the half-time team-talk given by boss Mark Sampson inspired them to their victory over Doncaster Belles.

The Vixens needed to win Sunday's game to keep alive their chances of winning the Women's Super League title.

They found themselves 3-0 down at the break, but fought back in the second half to win 4-3.

The fact that Arsenal can't win it now is good for the game. It mixes is up and puts some competitiveness in there.

"The manager came in and rather than shouting at us, the words he gave us inspired us," said 23-year-old McCatty.

"It made us realise that if we didn't go out and win then that was our season over.

"We knew we had 45 minutes to give our all. It was the realisation that it was in our hands."

Spain international Natalia scored a hat-trick and set up Ann-Marie Heatherson's goal to ensure their final game at league leaders Liverpool will be a title decider.

Bristol are two points behind the Reds, meaning they must win the clash in Chester on 29 September to take the trophy.

Arsenal are a point behind the Vixens in third, meaning their 10-year reign as champions of the women's domestic league is over.

"The fact that Arsenal can't win it now is good for the game," added McCatty, an England Under-23 international.

"It mixes is up a bit and puts some competitiveness in there. It shows that as much as they've dominated and done great things for women's football, it's about time other teams stepped up.

"I've been at this club seven years so to see the journey we've been on it would be unbelievable to win.

"We're going to go there [Liverpool] for the victory. It's all or nothing."