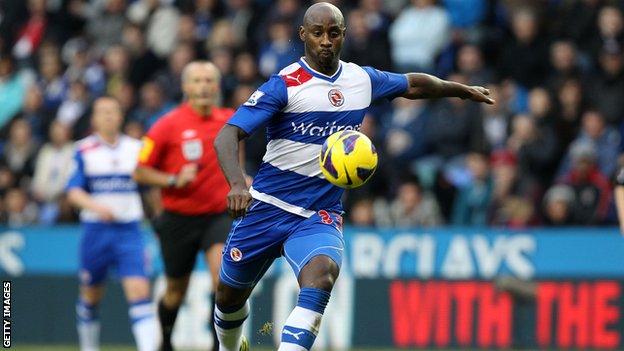 Injured Reading striker Jason Roberts is unsure when he will make his return.

Roberts, 35, last played in December 2012 and had surgery on a career-threatening hip injury in March.

In July, the veteran of over 400 games said he was close to a return, but Roberts now hopes to make his comeback before the end of the year.

I'm 35 years old and have never been injured before, so I've been lucky but I recognise how frustrating it is. But no one is more frustrated than me

"I'd like to say I'll be back before Christmas," Roberts told BBC Radio Berkshire. "The issue is I do not know, no-one can really say that."

Roberts began his career at Hayes in the 1996-97 season and went on to play for Wolves, Bristol Rovers, West Brom, Wigan and Blackburn before joining Reading in January 2012.

He was instrumental in helping the Royals win promotion to the Premier League that season, but played just 12 times in the top flight last year because of injury, with Reading relegated after a disappointing campaign

"It's been frustrating," admitted Roberts. "I've been out since December with this injury, but it's a serious injury and one we need to treat with kid gloves and assess it day by day.

"We've done everything we can since day one and as soon as I can be out there I will.

"We have to be realistic and treat the injury with the respect it deserves. An injury like this has finished some people.

"It's peaks and troughs, we have to assess it day by day. The medical staff are doing everything they possibly can and at the moment they are managing it. That will be the reality of the rest of my career, managing this injury."

Roberts says he has resumed training and is kicking a ball, but is not yet ready for contact work.

He added: "It's about intensity and recovery. To play Championship football you have to be at the correct level.

"I'm 35 years old and have never been injured before, so I've been lucky but I recognise how frustrating it is. But no one is more frustrated than me."