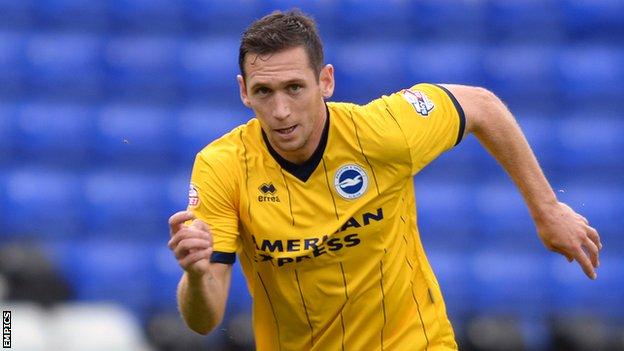 Brighton midfielder Andrew Crofts hopes the side will be able to cope without striker Leonardo Ulloa.

The Argentine will be suspended for three matches after being sent off in Sunday's 0-0 draw at Reading.

"The big man has gone in with his foot a bit high maybe. He knew it was a foul but he hasn't gone in to hurt the lad," Crofts told BBC Sussex.

"Leo has been on fire and we will miss him. I'm disappointed for him because he has been red hot."

He added: "He will get his head down and be ready for when his suspension is over."

Ulloa, who has scored four goals in six league games for the Seagulls this season, was shown a red card for a high foot on Royals defender Alex Pearce.

Brighton are looking to bolster their forward line in the loan market before their trip to QPR on Wednesday, with Craig Mackail-Smith and Will Hoskins long-term absentees through injury.

Ashley Barnes returned from a month out with a hip injury as a second-half substitute to lead the line following Ulloa's dismissal.

"He had a great couple of efforts on goal and did everything right.

"We'll have to see what the gaffer does but Barnesy could be a straight swap as he can do that role, no problems.

"We created a lot of chances when he came on. It is down to the manager but we will be working hard and put things into plan on Tuesday."

Crofts, 29, believes Albion can take the positives from the draw at the Madejski Stadium.

"Their keeper [Alex McCarthy] was man of the match, and I think that says a lot," the Wales international said.

"The boys put in a really good performance and we're four games unbeaten and were unlucky not to come away with a win against an ex-Premier League side.

"The team is really starting to gel, we're working hard and enjoying it.

"We were unlucky not to get three points but it is a point gained."