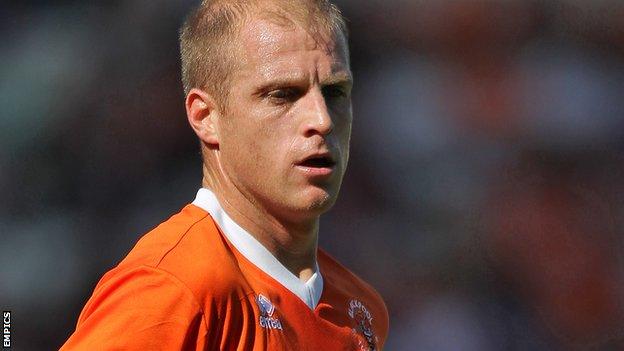 Neal Bishop would like to make a midfield berth his own at Blackpool, but is happy to remain a versatile member of Paul Ince's squad.

Bishop slotted in as an emergency left-back at Bournemouth on Saturday following Jack Robinson's red card.

The 30-year-old has also appeared at right-back for the club this season.

"It's a good group and anyone will do a job anywhere. It's just happened to be me and Chris Basham so far this season," he told BBC Radio Lancashire.

As part of a Blackpool squad which has been short on options for the majority of the campaign, former Notts County man Bishop has been utilised in a number of different roles by Ince during his first five appearances.

"Over the last four or five years, I've not played anywhere else but the centre of midfield," he continued.

"It's disappointing in a way because and I thought I was doing alright there, but circumstances meant I had to go to right-back.

"But if you ask any of the lads, they'll be happy to do a job out of position and I'm no different."

Bishop, who in August, headed the winner in a

The result maintained the club's position as Championship leaders and took their points tally to 16 from six league matches.

"Now's not the time to be talking about best-ever starts and giving ourselves pats on the back," added Bishop.

"We've had a good start and it's an ambitious group, but we need to kick on from this position and make the season one to remember."