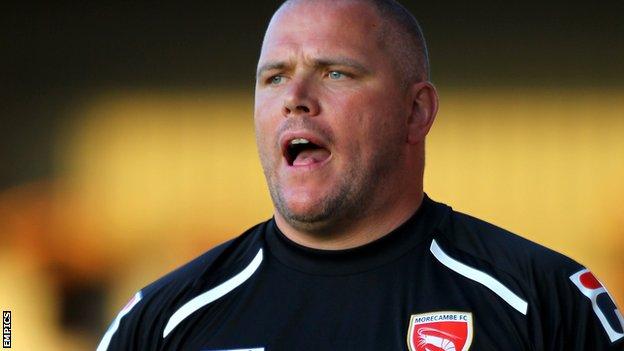 Jim Bentley hopes Morecambe's run of four league wins in a row will result in a bigger attendance for Saturday's home game with Dagenham & Redbridge.

Crowds for all three of their home fixtures in League Two so far this season have been below 2,000.

Morecambe have an average home attendance of 1,631 in League Two so far this season. Only Dagenham & Redbridge have attracted fewer home supporters in the division this term.

However, when the Shrimps played Premier League side Newcastle in the second round of the Capital One Cup in August, 5,375 people attended, which was a record crowd for a competitive match at the Globe Arena.

"If they're not going to come and watch us while we're sixth in League Two, they never are."

The 37-year-old continued: "It's important they come and play their part because we're going to be up against it for spells this season and we're going to need them, but we're also going to do well in other games and we want the fans along with us to enjoy those good days."

Bentley has often and the club have made attempts to increase crowds at the Globe Arena, even

More than 4,000 took advantage of that offer, while the Shrimps for their

It was like a murder scene when I went in there

On the field, Morecambe have excelled in recent weeks and climbed into the play-off places with a

The victory was achieved without midfielder Andrew Fleming, who suffered an unusual injury while in the team hotel on the evening before the match at Rodney Parade.

Bentley explained: "He went to switch the television off in his hotel, knocked a glass on the top of his foot and split his foot open.

"There was blood everywhere. It was like a murder scene when I went in there. It was just one of those things that happens, but thankfully we'll have him back next week."