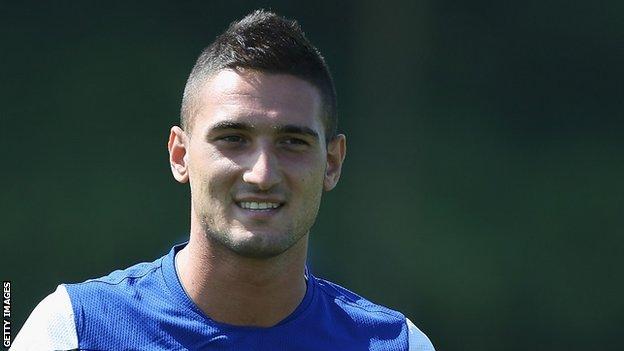 The 22-year-old Italian could make his Championship debut for Rovers at Watford on Tuesday.

"We've got him for an initial month with a view to extending it to the 93 days, which is the maximum," he said.

"I know from speaking to Sir Alex Ferguson and David Moyes he's a top quality player and David knows we'll look after him and keep him informed on his progress.

"We had a little nibble at him before the season started, but it wasn't to be then.

"Hopefully he'll add goals. He's been to big clubs on loan but not really played for them, and he's very hungry to get his career back on track. It's been a frustrating couple of years for him and he's keen to hit the ground running.

"Technically he's very good, he can hold the ball up, but we want to get him in the box because that's where he's at his best."

Macheda, who has played for Italy at every level up to Under-21, has made only 15 full and 21 substitute appearances for Manchester United in all competitions since joining the club as a trainee from Lazio in 2007, scoring five goals.

He trained with Rovers on Monday, and the club completed the paperwork later in the day.