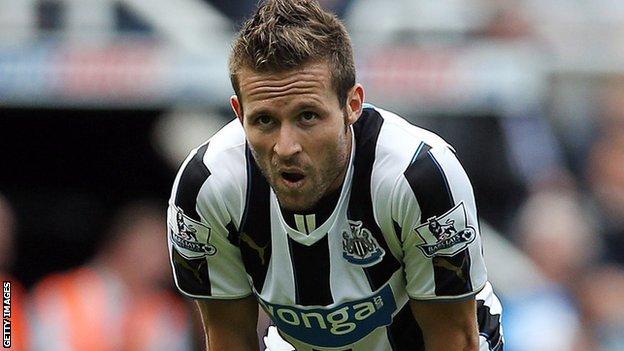 Newcastle midfielder Yohan Cabaye has apologised to supporters after refusing to play for the club last month.

Cabaye, 27, missed a 0-0 draw against West Ham after the Magpies rejected a £10m summer bid for him from Arsenal.

The France international stayed at St James' Park and made his first start of the season in a 2-1 win at Aston Villa on Saturday.

Yohan Cabaye joined Newcastle from French club Lille in June 2011 and made his debut in a draw against Arsenal.

"If the fans were, or still are, mad at me for what happened, then I understand and I apologise to them," said Cabaye.

"I want to come back from what has happened."

Before refusing to play against West Ham, Cabaye had missed Newcastle's opening Premier League game - a 4-0 defeat at Manchester City - and was subsequently absent from their 2-0 Capital One Cup victory at Morecambe.

But he came on as a substitute in the 1-0 win over Fulham on 31 August and started at Villa.

Cabaye insisted he is "happy" at Newcastle and that he would "give everything" for the club for the rest of the season as he targeted securing a place in France's squad for the World Cup next summer, if his country qualify.

"In your career, you do not have a career without bad moments," he added.

"I have moved on and now in my head I just want to work really hard, to get back in the team every week and to help the team - that is the most important thing for me.

"I want to forget what happened during the summer, I want to put it behind me and give everything for Newcastle every day, for the club and for my team-mates."