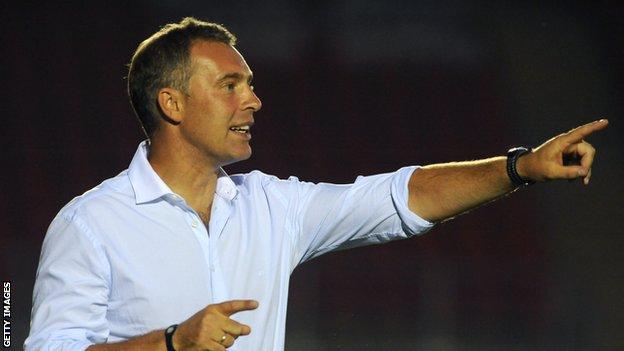 Dagenham & Redbridge manager Wayne Burnett says he is excited by the potential in his young squad.

They have two wins and three draws from their opening seven league games and beat Bristol Rovers 2-0 on Saturday.

"We are so young and we are naive at times but it is exciting here," Burnett told BBC London 94.9.

"I keep emphasising every week that there will be inconsistencies because they are young - but they are standing up to be counted."

He continued: "If you are a fan I think you should be excited that we have these young players coming through.

"I think the oldest player is Brian Saah or Luke Howell, who are both 26.

"People don't realise, or they may forget, that we had two 18-year-olds playing against Bristol Rovers in Jack Connors and Afolabi Obafemi.

"That is encouraging for young players and this football club.

"We have got some young players who are developing and progressing really nicely. That is the most pleasing thing for me."

Dagenham only avoided relegation from League Two on the final day of last season and Burnett, who was handed a two-year deal in the summer after an interim spell in charge, admitted his squad are still learning.

"Players have to understand that communication is key to help them and the team," the 42-year-old added.

"These players are growing up very quickly. I expect Brian Saah and Doey [Scott Doe] to be leading the group, even thought they are still young.

"We are creating a team ethic and ethos that without each other it can't work. It is a work in progress and we have to get a level of consistency."