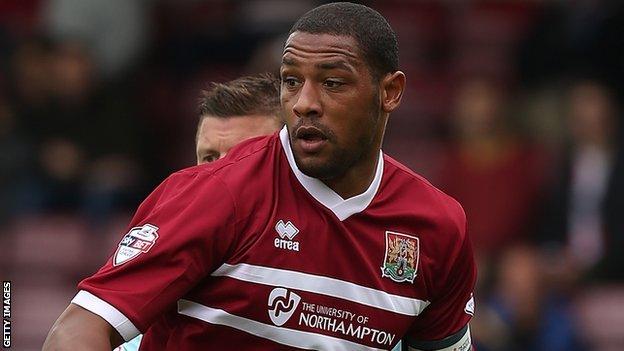 Northampton striker Clive Platt says the team must lose the "nervousness" which is affecting their performances.

They lost for the fifth time in seven league games against Exeter, having had the majority of chances to score.

Platt told BBC Radio Northampton: "We've created so many chances and not took them - myself guilty of that. The header [I had] I should score all day.

"We're playing great football but we're nervy. We need to be 2-0 up to see a game out. I think we're just anxious."

The Cobblers lie third from bottom of League Two, with their four points coming from a win over Newport County and a draw with Scunthorpe.

"We've not got the points we deserve," said Platt. "The crowd's edgy, we're edgy, and [scoring a second goal] would've taken the edge off things.

"When it's 1-1 at the end, we're still dominating, but we're still the more edgy team. I'm as disappointed as everyone else."

Manager Aidy Boothroyd declared himself pleased with his team, despite the defeat.

"I'm focusing on the performance," he said. "It's a game we would not expect to lose but that's how it is.

"I think Matt Duke has touched the ball twice, to pick the ball out of the net. They're clinical and we're not.

"Exeter are not going to run in behind you, they're going to look to counter-attack and play through the centre.

"That's why the two players [Gary Deegan and Darren Carter] were holding.

"The plan was to get both centre forwards in the box and the opposite wide player, but he didn't get in there all the time.

"But we still had the chances. In the end, you get what you deserve. There's a long, long way to go."