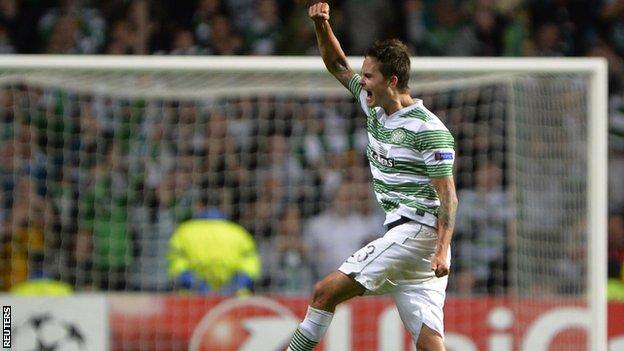 Celtic are unfazed at being tagged Champions League "underdogs", according to Mikael Lustig.

Neil Lennon's side get their Group H campaign under way against AC Milan in the San Siro on Wednesday.

And Swedish defender Lustig is relishing the chance to lock horns with Milan, Barcelona and Ajax.

"It will be really fun. Of course we're underdogs like last year but they're going to be massive games," he said.

Especially when we're playing at Celtic Park, we know we can beat any team

Celtic, who progressed to the last 16 from a group comprising Barcelona, Benfica and Spartak Moscow last season, have lost Gary Hooper, Victor Wanyama and Kelvin Wilson to English clubs.

However, Lustig believes the current squad are more than capable of holding their own in Group H.

"We lost three good players but I think we have a better squad this season overall," the 26-year-old said.

"We have lost big players like Hoops, Victor and Kelvin were really good for us last season.

"But I think the whole squad is stronger. We are a really young squad as well and everyone is one year older as well."

Lustig said their display away to Benfica in last season's Champions League campaign was the one game where they did not feel they played to their capabilities.

"We won at Spartak and we were really close to taking points at the Nou Camp as well so of course our confidence is maybe better than it was last year," he added.

"It's going to be really hard but we have faith."

Lustig said Celtic would aim to secure points on the road in Group H, with the three fixtures in Glasgow certain to whet the appetite.

"Especially when we're playing at Celtic Park, we know we can beat any team," he added.

"Last year was the same. We're not going to be happy to play some decent football but go back to Glasgow with zero points."

The Swedish defender insists the pressure is on Milan ahead of the clash in the San Siro.

"If they don't manage to take three points they're going to look on it as a massive failure," he said. "But we have everything to win and it's quite nice to have it that way."