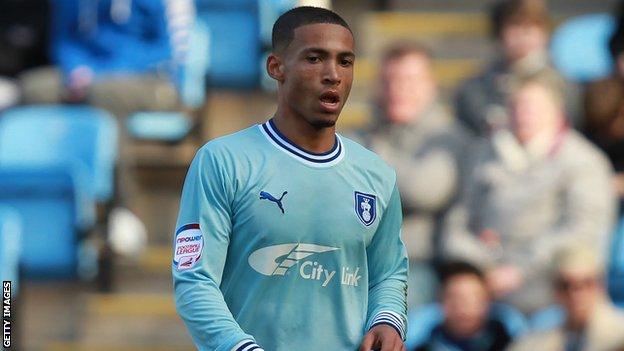 Coventry City defender Jordan Clarke has signed a new two-year contract with the Sky Blues - barely two months after being told he could leave the club.

The 21-year-old is now tied to his hometown club until June 2015, with the option of a further 12 months.

"In football, at times you love to be proved wrong and that is the case with Jordan," said boss Steven Pressley.

"I said to him in the summer that his future lay away from this club and the normal reaction is disappointment."

Clarke was one of eight players who were told they were to be offloaded, but a week later, Pressley reversed his decision and he has so far played every minute of Coventry's eight matches this season.

"Of course he was devastated when I gave him the news," said Pressley.

"But it put the bit between his teeth and nobody could be happier than myself that he's gone out and proved me wrong. I've been delighted with his contribution and his attitude, and long may that continue.

"He's got terrific attributes - he's quick, he's terrific in the air and he's also a very positive influence around the training complex and I look forward to continue working with him."

Clarke, who represented England at both Under-19 and Under-20 level, is now just nine games away from 100 appearances for the club, having made his Sky Blues debut in August 2009.