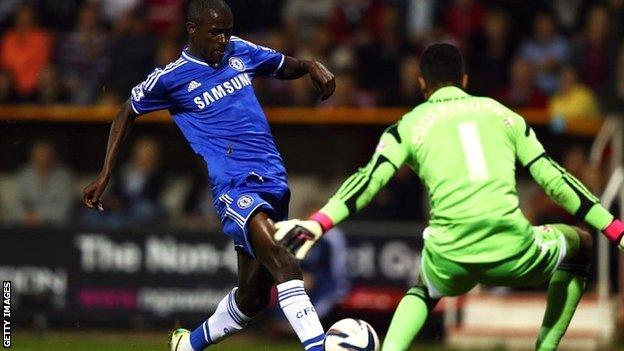 Chelsea eased to victory over League One Swindon Town to secure a place in the fourth round of the League Cup.

Fernando Torres opened the scoring when he poked home from close range for his first domestic goal of the campaign.

Torres then supplied Ramires, who dinked the ball past Wes Foderingham to make it 2-0 at the break.

Swindon had the ball in the net in the second half but Dany N'Guessan's header was ruled offside, and four-time winners Chelsea held firm to progress.

Jose Mourinho overhauled his side for the trip to the County Ground, making 10 changes from Saturday's 2-0 win over Fulham, and chose to recall exiled midfielder Juan Mata.

League One Swindon had not lost at home since February and have overcome Premier League sides Wigan and Stoke in recent years - both during Paolo Di Canio's regime.

And although Mark Cooper's youngsters impressed in possession they failed to match the class of their Premier League counterparts.

After a quiet opening 10 minutes, the Blues turned on the pressure and Foderingham was forced to make two excellent saves from Torres.

The deadlock was broken when Chelsea's attack split the home defence and Ramires picked out Mata, whose initial shot hit Foderingham, before the rebound spilled to Torres for an easy tap in.

Six minutes later they doubled their lead in style, Torres dancing past two Swindon defenders to feed Ramires, who delicately placed the ball over the keeper.

But two quick goals did not deter Town, as Iraqi midfielder Yaser Kasim challenged Mark Schwarzer with a shot from distance, before influential forward Alex Pritchard forced the 40-year-old debutant keeper to punch the ball out.

Swindon made an electric start to the second half and thought they had made the breakthrough when N'Guessan's diving header found the back of the net, but he was ruled offside.

Foderingham kept up his impressive performance by denying Torres with his left-foot while £30m Brazilian midfielder Willian shot wildly over with the follow up.

The two Chelsea players combined again for what looked to be a certain third goal in the dying minutes, but the Swindon keeper produced a fine stop once again before it was scrambled away.

The game petered out as Swindon tired, and Chelsea played out the final minutes with ease.

"I was pleased with our possession but just a bit disappointed we haven't really tested Chelsea enough.

"Second half we had a lot of possession, we had a couple of good headers, one of them disallowed, and it would have been interesting if one had gone in.

"I was just a bit frustrated we didn't create more than we did going forward but we have to remember who we're playing against."

"Obviously a lot has been made of the Juan Mata situation because he's a high-profile player.

"The message to all of our attacking players from Jose from day one has been they need to contribute offensively in terms of their production and of course they have to contribute out of possession and defend.

"That's been the challenge not just to Juan but all of our attacking players. In Juan's case, if you look at his performance here, he made Fernando's chance and was involved in the goal. Those two moments - goal-making and goal-scoring actions.