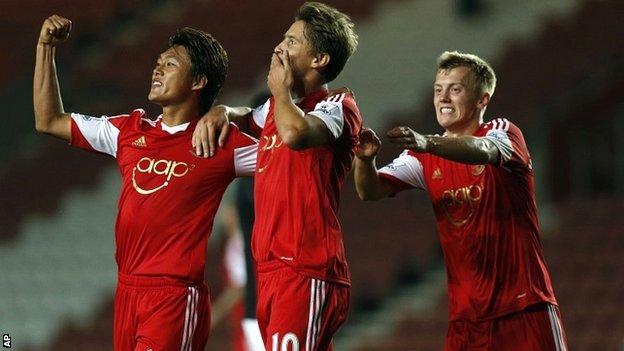 Southampton reached the last 16 of the Capital One Cup with an unconvincing win over League One Bristol City.

On his recall to the side, Gaston Ramirez volleyed in after 15 minutes following James Ward-Prowse's cross.

The hosts lacked fluency after 11 changes to the team that beat Liverpool on Saturday and City's Jay Emmanuel-Thomas went close to equalising.

Jos Hooiveld then headed in a Ward-Prowse corner seven minutes from the end to book a fourth-round place.

Uruguayan Ramirez has not started a Premier League match since April 13, but his performance gave a glimpse of his undoubted quality since signing from Bologna in August 2012 for £12m.

The 22-year-old forward twice went close in the first half and continued to prove a handful after the restart but it masked a disjointed display from Mauricio Pochettino's side.

City, who have yet to win in the league this season, knocked out Crystal Palace in the previous round and dominated for large spells of the second period.

Emmanuel-Thomas, Joe Bryan, Bobby Reid and Stephen McLaughlin all threatened to level for the Robins.

However, Hooiveld's powerful header seven minutes from time ended City's hopes of winning their first third-round tie in a decade - a match Saints ended with 10 men after Ramirez hobbled off in stoppage time.

Southampton assistant manager Jesus Perez: "We were obviously made hard to work in the second half. I thought the game was difficult.

"We scored in the first half but the opponent played well. They played without pressure. We are very happy about the result because it became a hard training session towards the end of the game.

"We know it is difficult to play as a team when you've made 11 changes, but this type of game, the cup games, we have to fix these kind of problems."

"We came to terms with their possession, which you expect when you play a top team."